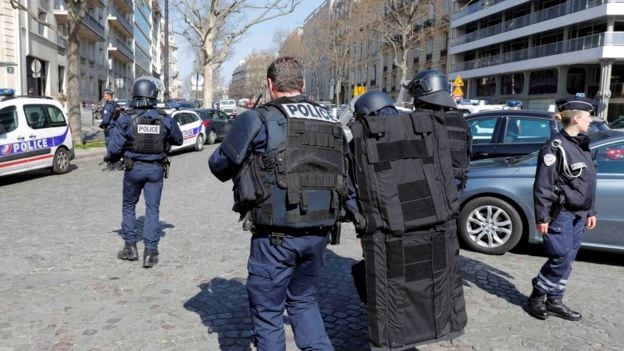 French police patrol the area after an explosion at the Paris IMF office (Photo: Reuters)

A letter bomb exploded at the International Monetary Fund office in Paris on Thursday and has injured the employee who opened it.

BBC News reports the IMF employee suffered hand and face injuries from the explosion, and the rest of the staff have been evacuated from the office in the World Bank building.

IMF director Christine Lagarde called the attack a “cowardly act of violence” and said the organization was working with French police to investigate the incident.

Unnamed police sources indicated the exploding device may have been a firework and that the letter was delivered by post.

The incident comes after a parcel bomb was intercepted by the German finance ministry on Wednesday. The parcel was intended to be delivered to Finance Minister Wolfgang Schaeuble, and police indicated the device was engineered to inflict “severe injuries” when opened.

The Conspiracy of Fire Cells, a far-left Greek group, claimed responsibility for sending the German parcel on their website.

Schaeuble is scheduled to meet with US treasury Secretary Steven Mnuchin on Thursday.