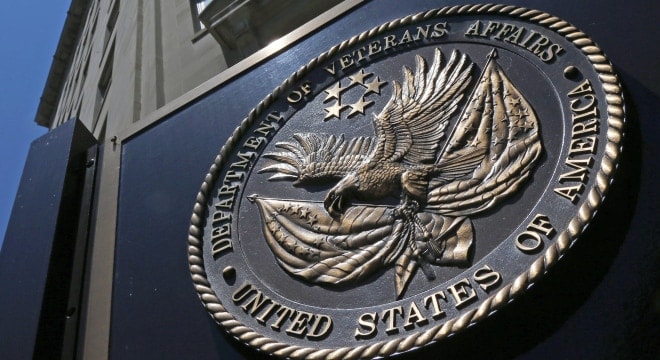 The seal affixed to the front of the Department of Veterans Affairs building in Washington. (Photo: Charles Dharapak/AP)

Just a month after its introduction, a House bill to reverse the Department of Veterans Affairs’ practice of reporting some veterans to the FBI’s National Instant Criminal Background Check system has been sent to the Senate.

The measure, introduced Feb. 16, prohibits the VA from considering beneficiaries assigned a fiduciary trustee to act on their behalf as being declared “mentally defective” and without a hearing forwarding their information to the FBI’s list of those stripped of gun rights. The proposal passed 240-175 largely along party lines on Thursday.

“I strongly believe we must do everything in our power to protect the rights guaranteed to all Americans, especially the men and women who have served, by the Constitution,” said sponsor, House Committee on Veterans’ Affairs Chairman Phil Roe, R-Tenn., in a statement. “The Veterans 2nd Amendment Protection Act does just that.”

Roe’s bill would require a federal magistrate or judicial authority ruling that a VA beneficiary is a danger to themselves or others before the agency would forward their information to the FBI. Currently, the VA automatically sends the veteran’s name if they meet a certain list of guidelines, effectively making them prohibited firearms possessors under the law. As of December 31, 2016, the VA has reported 167,824 individuals to NICS.

The measure had drawn scorn from former CIA director and retired Army Gen. David Petraeus, who, alongside a group of other retired admirals and generals, say it would endanger mentally ill veterans by allowing them to access firearms.

“The high suicide rate among veterans is devastating – but we can help mitigate this problem with smart policies and practices,” said Xenakis. “We should take a page out of the military training manuals where they train us to think ‘safety first’ and avoid unnecessary harm and injury. I urge our elected leaders to reject H.R. 1181, a misguided approach to the wellbeing of our nation’s veterans.”

However, gun rights groups contend there is no data connecting needing help arranging personal finances with being a danger to oneself and that the bill ensures due process rights.

“Needing help managing your money does not make you a danger to society,” said Chris W. Cox, executive director of the National Rifle Association’s Institute for Legislative Action. “The NRA is pleased with the House vote today and we look forward to the Senate taking action soon.”