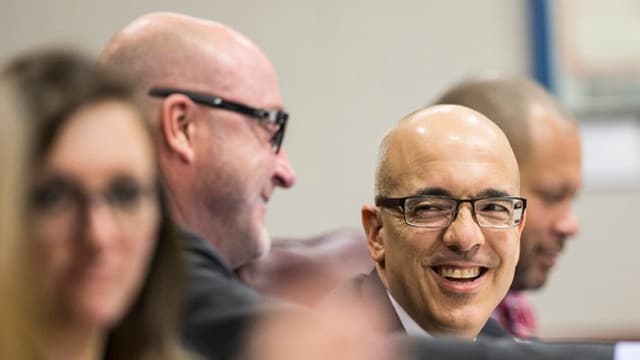 Sen. Moises Denis, D-Las Vegas, shares a laugh with colleagues during the first meeting of the Senate Judiciary Committee on the second day of the Nevada legislative session on Feb. 7, 2017. (Photo: Benjamin Hager/Las Vegas Review-Journal)

The proposal, Senate Bill 115 — a joint effort co-sponsored by Clark County Democrats Sen. Moises Denis and Assemblywoman Shannon Bilbray-Axelrod — would authorize libraries to preempt state law and ban weapons outright, an exemption so far only given to schools, colleges and daycares.

Denis and Bilbray-Axelrod served as library trustees before becoming state lawmakers and both agreed libraries function as “extensions of the education establishment.”

The “original bill” Denis referred to, SB 175, delineates the power of regulating firearms solely to the state Legislature.

Denis clarified Thursday the only thing the bill would change is the ability to openly carry firearms in libraries — and library boards could still adopt policies allowing for it. Concealed weapons, he said, will continue to be banned from public buildings lacking metal detectors or posted signs prohibiting firearms.

The proposal comes one year after a high-profile lawsuit involving a woman who openly-carried a .38-caliber revolver while visiting a library in Las Vegas with her three children. The woman, Michelle Flores, lost her library privileges after she refused to leave while protesting the branch’s policy prohibiting openly carried firearms.

An attorney for the Las Vegas-Clark County Library District argued SB 175 only applies to cities, counties and towns — not libraries. The judge in that case agreed.

Republicans on the committee expressed concern about turning libraries into magnets for criminal activity. Other opponents criticized the bill’s language for failing to carve out an exception for parking lots.