Woman in weapon heist from Army Reserve center gets 21 months Ashley Bigsbee, 27, of Dorchester, was identified early in the investigation in part due to a series of photos she took of and with the stolen guns. (Photo: DOJ)

A federal judge in Boston on Wednesday handed down sentencing on one of three defendants involved in the theft of 16 weapons from a reserve center in Massachusetts.

Ashley Bigsbee, 27, of Dorchester, was given 21 to 36 months in prison, followed by supervised release for a term of three years, for her part in the 2015 theft of more than a dozen guns from a U.S. Army Reserve center in Worcester.

According to court documents, Bigsbee along with her boyfriend Tyrone James, 29, helped store and sell the M4 rifles and M11 pistols allegedly stolen by a recently discharged Army Reserve soldier, James Walker Morales.

Morales told investigators that Bigsbee introduced him to Tyrone James, who then arranged the sale of five handguns in two separate transactions. A series of photos and text messages by James and Bigsbee were sent to potential buyers including shots of Bigsbee, identified by distinctive hand tattooing, holding one of the stolen “U.S.” marked M11s, one of the select-fire M4’s on a kitchen table, and two M11’s lying on their bed.

In exchange for the assistance selling the guns, Morales gave both James and Bigsbee an M4 for their trouble. Bigsbee at first lied to federal agents as to her knowledge of the guns then, after she was taken into custody, helped investigators recover at least one M4 from an acquaintance. She pled guilty to her role last December. 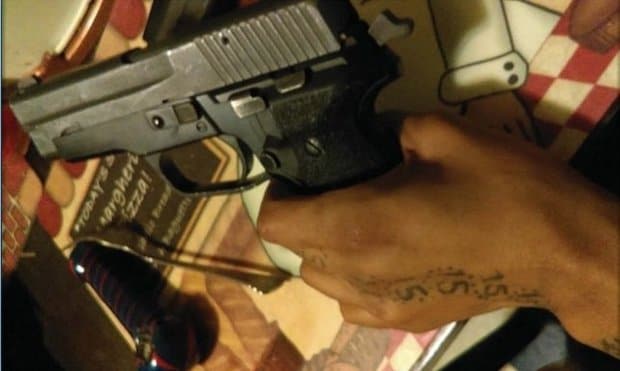 Authorities said they could match the pictures because of her distinctive hand tattoo. (Photo: DOJ)

Judge Hillman had the power to give Bigsbee a term of imprisonment of up to 20 years, supervised release of up to nine years and a fine of up to $750,000 and in a sentencing memo, the government argued Bigsbee deserved a significant prison sentence. During sentencing on Wednesday, Bigsbee told Judge Hillman she had in the past received counseling for mental health issues and is currently in treatment for drug abuse. She has been remanded to the custody of the U.S. Marshal.

James is set to be sentenced on March 24 and Morales is scheduled to begin trial on April 10.

In the end, all the M4s were recovered while four handguns remain unaccounted for. The FBI in 2015 issued a reward of $15,000 for information leading to the recovery of the weapons.