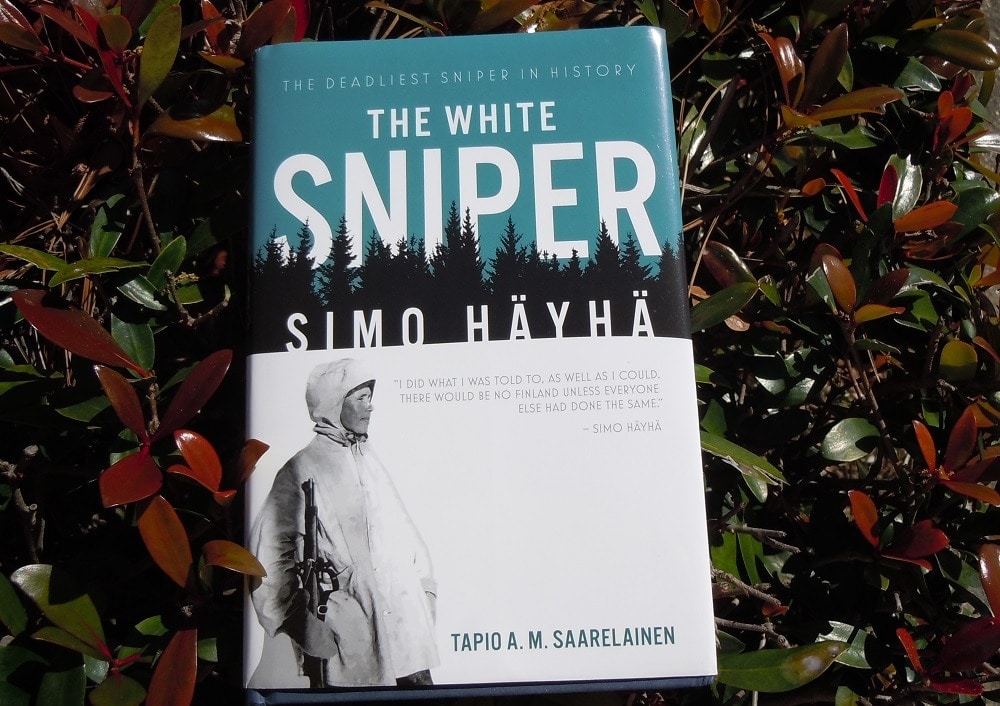 Tapio Saarelainen’s White Sniper goes past the second and third-hand accounts and brings you, as Paul Harvey would say, the rest of the story. (Photos: Chris Eger/Guns.com)

During the 1939-40 Winter War between Finland and the Soviet Union, a hunter and farmer by trade by the name of Simo Hayha returned to his reserve unit and picked up 542 confirmed kills with iron sights.

While versions of Hayha’s story is well known in the West and has even been covered by Guns.com briefly, the 192 pages of Tapio Saarelainen’s White Sniper goes past the second and third-hand accounts and brings you, as Paul Harvey would say, the rest of the story.

It should be noted that Saarelainen is a career military officer who spent two decades training precision marksmen for the Finnish Army and even helped write that Scandinavian country’s manual for snipers. Besides this obvious resume to prepare him to write the work on Hayha, the author also met and interviewed the Winter War hero dozens of times over a five year period.

That’s a good part of what makes White Sniper such an interesting read is that it is drawn largely from first-hand accounts from a man who has been referred to as the deadliest sniper in history, but also from those who lived next to, fought alongside with, and knew the man personally. As such, it sheds insight on the man not known in the West. Such as the fact that he used his own personal Finnish-made Mosin M/28-30 rifle that he had paid for with his own funds. That his outnumbered fellow Finns, fighting alongside him in the frozen Kollaa region during that harsh winter, called him “Taika-ampuja” which translates roughly as the “Magic Shooter.” That he took almost as many moose and foxes in his life as he did Russians. That he was unassuming in later life, spending most of his time calling on old friends in his yellow VW Bettle.

The book is broken down into three sections.

The first includes a dry recounting of dates and background on Hayha’s life (for instance, that he was promoted to corporal during his conscription period on June 1, 1926, that he was one of just seven individuals awarded the Cross of Kollaa in pure silver, et.al.) as well as his period as a competition shooter before the war, able to put 16 aimed shots on target from a Mosin bolt-gun in under a minute. The section continues with the tale of his wartime wounding — shot in the face in the final days of the conflict — and recovery. 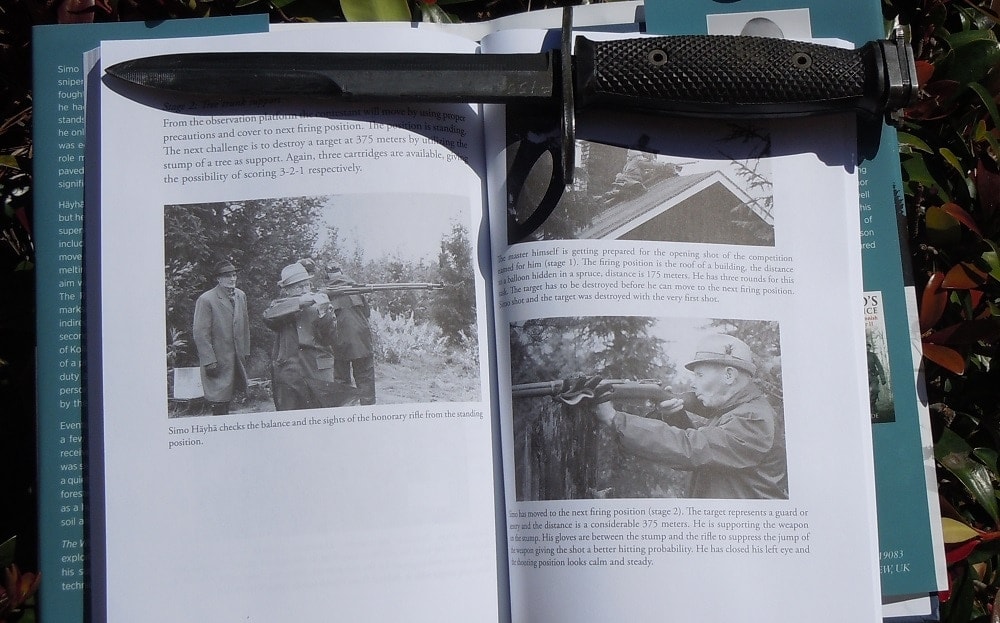 The work includes many rare images of the Finnish sniper throughout his life and includes post-war visits to the actual 1939-40 battlefields he served on.

The second section deals with the secrets of Hayha’s success. His tactics, character, and training. While he was no extreme long range marksman — most of his shots were at targets under 150 meters away — his fieldcraft and stalking, learned from hundreds of days spent in the forest as a sustenance hunter, backed by his choice of snow-covered firing positions between the Finnish and Soviet lines, carried the day. For this, Saarelainen revisited the same battlefields with the famed sniper decades after the fact and shed light on exactly how and why these nests worked. 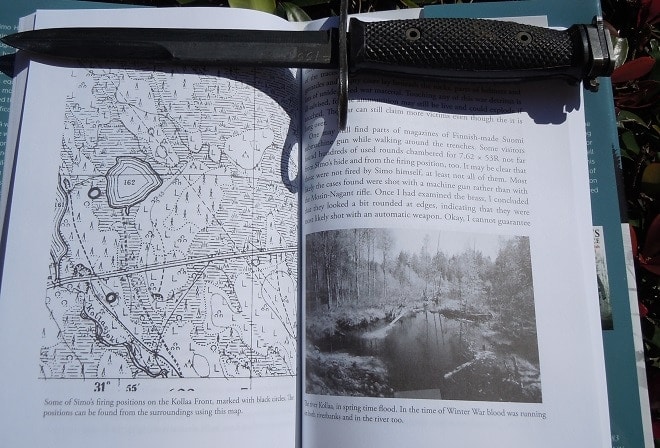 Besides covering Hayha’s story, the book delves into the combat in the Kollaa region as part of the Winter War.

Finally, Saarelainen covers the mechanics of the Finnish small arms used from 1918-1940, which is a great primer for anyone interested in that country’s Mosin, Suomi and Mauser use. (As a footnote, we would be remiss if we did not mention that the Saarelainen found out Hayha’s issued Mosin during his initial service with the Army in the 1920s was a Tsarist-marked U.S. Westinghouse-made M.91.)

The book concludes with the impact that Hayha has had on the modern Finnish Army and it’s sniper program, highlighting a very interesting and useful course of fire developed from his lessons. 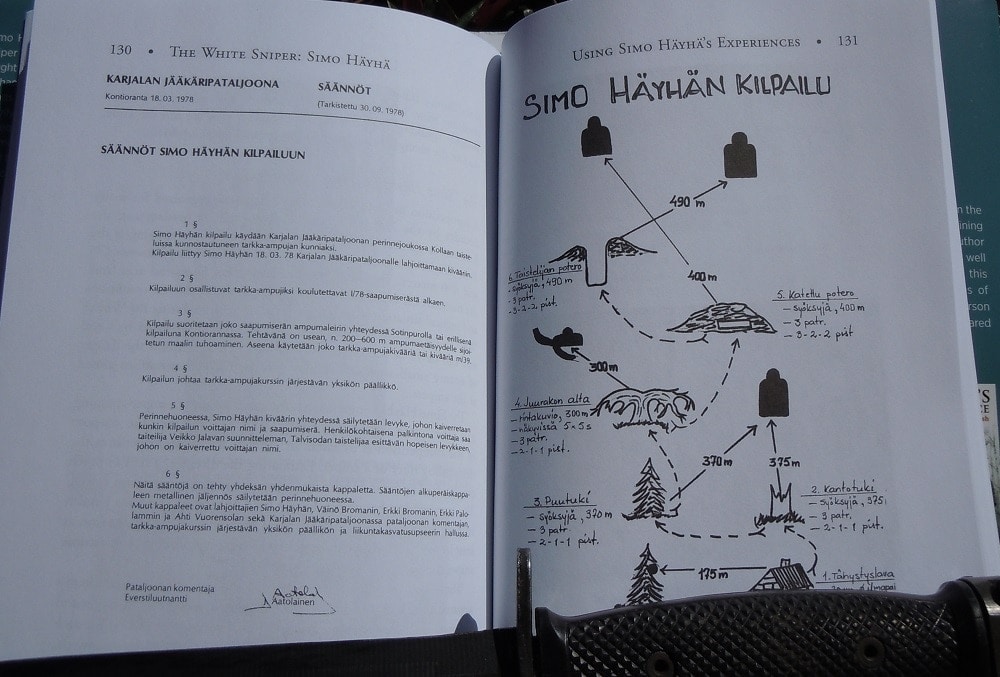 In all, if you are curious about the history of one of the greatest snipers, or more obliquely about Finnish military history, Mosin rifle use or the Winter War in general, this is a must for your bookshelf.