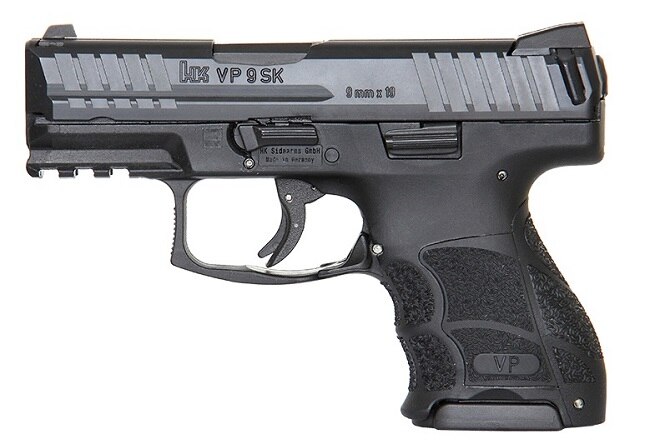 The HK VP9SK with flush-fit 10-round magazine and standard sights. Note the paddle-style release for the magazine (Photos HK)

Heckler and Koch is stoking the fire under the expectations for the U.S. release of a new subcompact variant of their VP9 series 9mm polymer frame pistol.

Over the weekend the German powerhouse dropped “Coming soon” posts on both Instagram and Facebook on the new gun, with a link back to its placeholder on the company’s U.S. website, but played coy with just how far down the road “soon” will be.

“Hey guys, it is coming oh so soon. No exact ETA yet, but sit tight!” noted HK’s social media.

The newest entry to the VP9 line is detailed through the site and user’s manual as utilizing a Browning-type modified linkless locking system in its striker-fired action. Overall length in 6.61-inches with a 3.39-inch barrel– comparable to but just a tad larger than the Glock 26– though the German gun beats the Glock by having an accessory rail and forward slide serrations. Unloaded weight is 23 ounces.

A flush fit 10-round magazine is standard though optional 13 and 15 rounders will be available and both images released of the pistol by HK only show a paddle style mag release. Trigger pull is 4.5 – 5.6 pounds. 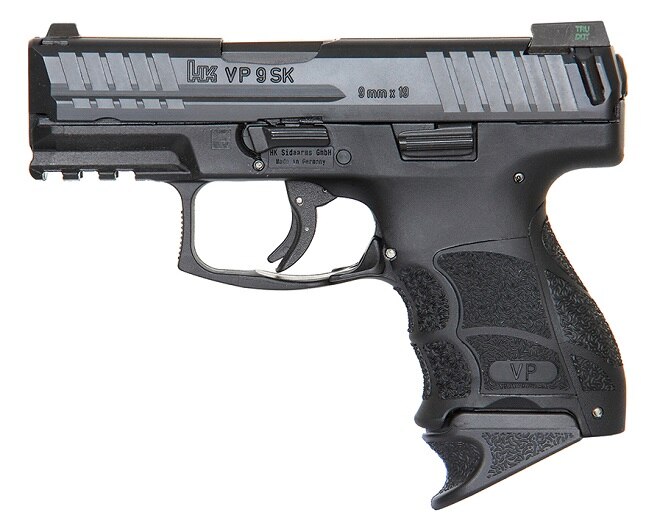 The VP9SK with an extended mag and optional night sights

The subcompact variant of the VP9 has been the stuff of HK forum legend as far back as 2015 and earlier this month the company showed off a pistol dubbed the SFP9SK at the IWA Show in Nuremberg, Germany.

Loaded with options for paddle or push-button mag releases, as well as different triggers and safety levers, the SFP9K seems pitched to European law enforcement and military use. It is not clear if the same options will be available on a U.S.-marketed VP9SK.

Heckler Koch shows lot of new pistols at #IWA. I think #SFP9SK / #VP9SK will be a winner! :) pic.twitter.com/vJyMQ5EhVD