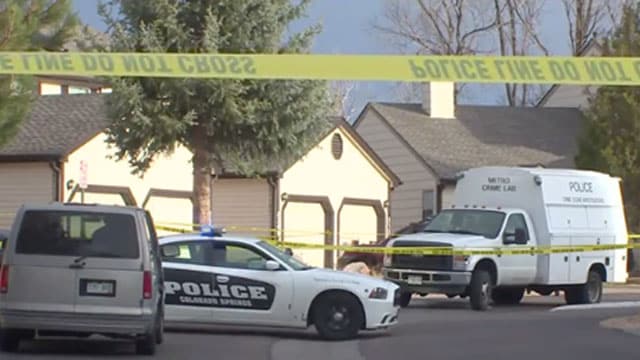 Neighborhood residents said they did not hear anything overnight but awakened to police cars parked at the housing complex. (Photo: KKTV)

A domestic dispute at a housing complex in Colorado Springs last week ended in gunfire, but police say the 19-year-old who pulled the trigger may have been defending his mother.

Police responded to a 911 call regarding the shooting at the townhouse a little after 3 a.m. Thursday, according to a press release from the Colorado Springs Police Department.

Responding officers found a male inside the residence suffering from what appeared to be a gunshot wound. The man, who authorities did not publicly identify, was transported to the hospital where he died a short time later as a result of his injuries.

According to Lt. Howard Black with the Colorado Springs Police Department, at some point, the man and woman became involved in an argument. But when the argument turned into a physical fight, the woman’s 19-year-old son stepped in and shot the man. The police were then called to the scene.

It’s unclear if the teen or his mother suffered any injuries during the altercation. Also unknown is whether the man was the teen’s father or former stepfather or if the couple had a previous history of domestic violence.

While the investigation is still ongoing, Black said the shooting appears to be a possible case of self-defense.

“You do have the right to defend, to protect yourself or another person, so obviously we’ll be looking at the self-defense issues,” Black told reporters, stressing the investigation was still in the early stages, and there was no ongoing threat to the community.

Neighborhood residents, speaking with reporters, said they did not hear anything during the altercation, but awakened to police cars early that morning.