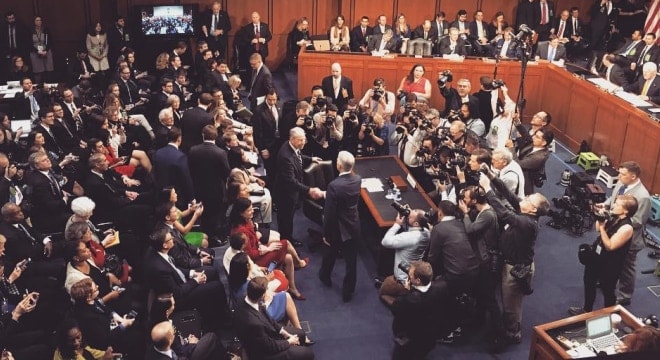 Gorsuch is led to his seat by Senate Judiciary Committee Chairman Chuck Grassley on Monday to begin his confirmation hearings. (Photo: judiciary.senate.gov)

Judiciary Committee chair, U.S. Sen. Chuck Grassley, R-Iowa, showed Gorsuch his seat as was customary and opened the proceedings by speaking of the late Justice Scalia before moving on to address the matter at hand. In his opening statement, the senator spoke to the separation of powers– holding the Obama administration often overstepped its regulatory authority for eight years– and the responsibility of the judiciary to hold both Presidents and lawmakers to the Constitution.

“Fortunately for every American, we have before us today a nominee whose body of professional work is defined by an unfailing commitment to these principles,” said Grassley. “His grasp on the separation of powers—including judicial independence—enlivens his body of work.”

The top Democrat on the committee, U.S. Sen.  Dianne Feinstein, D-Calif., was blunt in her opening statement about the “unprecedented treatment” lawmakers gave in denying a hearing to President Obama’s nominee to the open Supreme Court seat– Chief Judge Merrick Garland– calling it disappointing.

“For those of us on this side, our job today is not to theoretically evaluate this or that legal doctrine or to review Judge Gorsuch’s record in a vacuum,” Feinstein said. “Our job is to determine whether Judge Gorsuch is a reasonable, mainstream conservative or is he not.”

Feinstein pointed out the high court Gorsuch is nominated will have the final say on several controversial issues ranging from abortion to campaign finance to environmental law or “whether the NRA and other extreme organizations will be able to block commonsense gun regulations, including those that keep military-style assault weapons off our streets.”

As for the nominee himself, the jurist was introduced by U.S Sen. Michael Bennet– a Colorado Democrat– and President Obama’s former acting Solicitor General Neal Katyal.

Late in the afternoon, Gorsuch was able to address the committee, speaking to his Colorado roots, then moving to his impartiality by pointing out the bulk of his 2,700 rulings issued while a judge on the 10th Circuit Court of Appeals in Denver were unanimous rulings and that he went with the majority in “99 percent of cases.” Speaking against judges being thought of as “politicians in black robes” he said he would “hang up the robe” if he thought that was the case. Instead, he offered “Ours is a judiciary of honest black polyester.”

In Gorsuch’s 68-page Committee Questionnaire, he does disclose a few partisan leanings such as prior membership in the Republican National Lawyers Association, volunteering for the political campaigns of Presidents Reagan and Bush before becoming a judge– his mother ran the Environmental Protection Agency under the former– and speeches made before the Federalist Society.

Between 1993-94, Gorsuch clerked for Supreme Court Justices Byron White and Anthony Kennedy, the first nominated to the high court by President Kennedy, the latter by Ronald Reagan. He was confirmed in 2006 by a unanimous Senate vote to his current seat in the 10th Circuit after a nomination by President George W. Bush, having formerly worked in private practice and in the Bush-era U.S. Department of Justice.

The confirmation hearing is scheduled to resume on Tuesday.