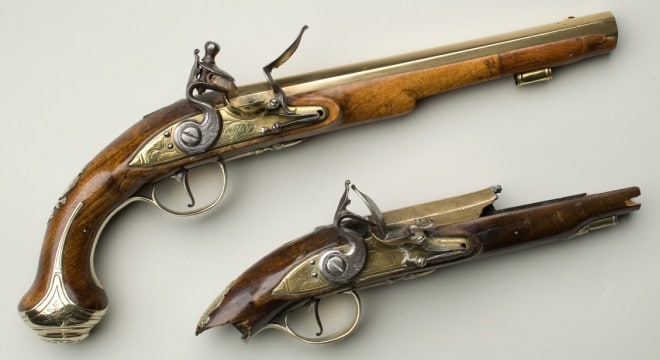 This pair of flintlock holster pistols were believed to have been owned by George Washington and were made in England in the 18th Century. (Photo: Mount Vernon)

Cosmopolitan Magazine weighed in on the Second Amendment, Donald Trump’s Supreme Court pick Neil Gorsuch, and constitutional originalism, but got at least one thing wrong.

The “best-selling young women’s magazine in the U.S., a bible for fun, fearless females that reaches more than 18 million readers a month,” published a piece by Jill Filipovic on Tuesday entitled 9 Reasons Constitutional Originalism Is Bullsh*t aimed at smiting the concept that the U.S Constitution should be interpreted as close to the framer’s actual intent as possible.

In the multifaceted attack on the theory, Filipovic steamrolls through a number of contemporary topics and compares them to what was going on in the new United States when the Constitution was signed. Eventually, gun politics reared its head and the piece addressed it with this response (emphasis ours):

No, not even Scalia, who decided plenty of cases according to his own whims and opinions. Take the District of Columbia v. Heller case, about a D.C. law restricting handgun ownership. Until recently, judges generally interpreted the Second Amendment according to the same narrow interpretation many historians say the founders held, as evidenced by the text itself: that the Second Amendment doesn’t give individuals the right to bear arms, but rather provides for the right of well-regulated militia to exist. There’s also significant historical evidence that the framers didn’t intend to protect individual rights to bear arms — when the Constitution was being created, several states proposed language that would have done just that, and they were rejected by the framers in favor of the militia language of the Second Amendment. Nor, of course, did handguns exist in the 18th century. But the “originalists” on the Supreme Court nevertheless interpreted the Second Amendment as protecting an individual right to handgun ownership, flying in the face of the text itself and the founders’ intentions.

Just in case you missed the emphasis, the piece says, “Nor, of course, did handguns exist in the 18th century.”

As noted in Brian J. Heard’s Handbook of Firearms and Ballistics, “Handguns were known in Italy in 1397, and in England they appear to have been used as early as 1375.”

The oldest handgun on public display is the 15mm Tannenbergbüchse or “Tannenberg handgonne,” made sometime before 1399 and is in the collection of the Germanisches Nationalmuseum in Nürnberg, Germany.

The world’s oldest revolver believed to exist, crafted in 1597, can be found at the Maihaugen Museum in Lillehammer, Norway. It has an eight-shot cylinder and was produced two centuries before the U.S. Constitution.

The Royal Armouries Collection in London has literally hundreds of handguns ranging from matchlocks to wheellocks to flintlocks that were made before the United States was united at all.

Moving into Colonial Times, Mount Vernon notes that, “George Washington’s correspondence includes dozens of references to purchasing pistols and to receiving them as gifts from friends. His executors recorded four pairs of pistols and ‘7 Guns’ in his Study after his death.”

Thomas Jefferson, another founding father, owned several handguns before, during and after the founding of the Republic.

President James Madison, who in the 18th century conceived the Second Amendment, also owned at least one set of pistols, though it should be pointed out that they were presented to him in 1816.

A French-made M1777 (as in designed in 1777 — part of the 18th Century) flintlock pistol is in the collection of the Springfield Armory Museum and is believed to have been used in the Revolutionary War. It served as the basis for the first U.S. military contract pistols in 1799. Similar British-made handguns of the same era for both military and personal use are in the museum’s collection as well.

In short, yes, Cosmo, there were a few handguns around in the 18th Century. You could argue, in fact, that they were in “common use” but that’s a whole different article there.