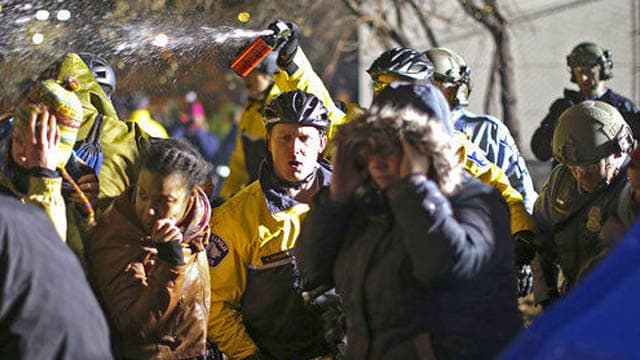 The police response to 18 days of protests following the police killing of a black man in Minneapolis is under the microscope in a report released Monday by the Department of Justice.

The 99-page report found the city and the Minneapolis Police Department could improve coordination and communication during such demonstrations, but also praised officers for their professionalism.

“Regardless of whether it’s because I lacked the bandwidth or I was constrained by legal reasons or I simply lacked the skill, I did not communicate in a way that would have helped the situation get better. Sorry. I am sorry,” said Mayor Betsy Hodges at a news conference, according to the Twin Cities Pioneer Press.

Hodges and Minneapolis Police Chief Janee Harteau requested the review, which was conducted by the Community Oriented Policing Services arm of the DOJ. The report provided a detailed, day by day breakdown of events from the point of view of law enforcement, the government, and members of the community.

Protestors set up a makeshift camp outside the fourth precinct police station in Minneapolis following the police-involved shooting of 24-year-old Jamar Clark on Nov. 15, 2015. During the nearly three week occupation, a shooting broke out, an intoxicated woman tried to drive her car through a back fence, and tensions ran high between protestors and the MPD, with demonstrators threatening police with Molotov cocktails and verbally abusing officers. One officer compared the scene to his military tours in Afghanistan.

“There were five injuries caused by a group of alleged White supremacists who shot into the crowd of demonstrators; however, no serious injuries were attributed to interactions between MPD officers and demonstrators,” reads the report.

Despite the chaotic scene, the report was largely positive in its assessment of MPD officers.

“The Minneapolis Police Department displayed commendable restraint and resilience in these extremely difficult circumstances,” said Acting COPS Office Director Russell Washington in a statement. “The findings and recommendations outlined in the report will not only benefit MPD and the City of Minneapolis, but provide a roadmap for other cities faced with similar challenging situations.”

The protests cost the city more than $1.15 million, mostly for police overtime. Other expenses covered barriers and fences, with $50,000 going towards property damage.

“We hope that the lessons in this report will provide guidance to other agencies that may encounter similar events in the future and add to the growing body of literature that public safety agencies can use to enhance their preparation for, and response to, civil disturbances in their communities,” reads the report.