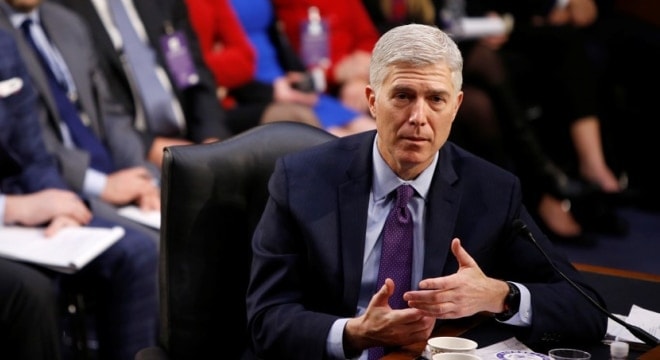 Senate Judiciary Dems asked tough questions of Judge Gorsuch during his marathon first round of questioning on Tuesday.

Gorsuch, nominated by President Trump to replace the open seat on the U.S. Supreme Court left by the death of Justice Antonin Scalia in 2016, answered questions on his views on gun rights litigation in his second day of hearings.

First to broach the subject in the 11-hour event was Judiciary Committee Chair, U.S. Sen. Chuck Grassley, R-Iowa, who asked Gorsuch about the 2008 Heller decision in which the Supreme Court decided 5-4 that the Second Amendment protects an individual right to bear arms.

“If I ask you to tell me whether Heller was rightly decided, could you answer that question for me?” posed Grassley.

Gorsuch answered that he left his personal views “at home” and that Heller was a precedent of the Supreme Court “and as a good judge you don’t approach that question anew as if it had not been decided.”

The Committee’s ranking Democrat, U.S. Sen. Dianne Feinstein, D-Calif., grilled the nominee on torture and wiretapping activities of the George W. Bush presidency, which Gorsuch served in the Department of Justice, then circled back to Heller, using Scalia’s remarks at the time.

“Do you agree with that statement that under the Second Amendment weapons that are most useful in military service, M16 rifles and the like, may be banned?” she asked.

Gorsuch replied, saying, “Heller makes clear the standard that we judges are supposed to apply. The questions is whether it’s a gun in common use for self-defense and that may be subject to reasonable regulation. That’s the test as I understand it. There’s lots of ongoing litigation about which weapons qualify under those standards and I can’t pre-judge that litigation.”

Feinstein pressed the nominee for a more concise answer up or down on Heller to which he replied, “Whatever is in Heller is the law, and I follow the law.”

The California lawmaker next turned to the recent decision by a 10-4 panel of the U.S. 4th Circuit Court of Appeals to uphold Maryland’s 2013 “assault weapon” ban, asking Gorsuch if “profound” Second Amendment ambiguities should be decided by the court or legislatures.

“The Supreme Court has spoken and Heller is the law of the land,” replied Gorsuch.

Gorsuch is set to begin his third day of hearings on Wednesday at 9:30 a.m.

U.S. Sen. Chuck Schumer, D-NY, while not on the committee has called to delay a vote on Gorsuch due to the FBI probe of potential Russian involvement in the 2016 presidential election. Grassley responded to Schumer’s call as a “ridiculous idea.”