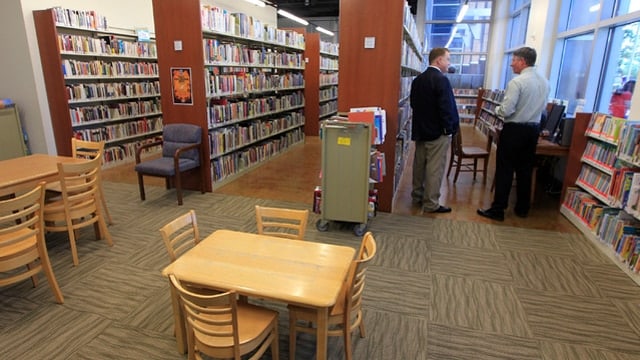 Denis and Bilbray-Axelrod credited their years as library trustees for inspiring the bill, which would extend the right to ban all firearms outright to libraries. Currently, only schools, colleges and day cares can regulate guns over and above state law, per Senate Bill 175 of 2015.

Denis said last month libraries are “extensions of the education establishment” and shouldn’t receive different treatment when it comes to weapons policies.

“This is a bill that came out of changes that were made two years ago as far as removing public libraries from being educational institutions,” Denis said of the proposal during session Tuesday. “I feel they need continue to be considered as such and brought this bill forward.”

Denis clarified during a work session last week the only thing SB 115 would change is the ability to openly carry firearms in libraries — and library boards could still adopt policies allowing for it. Concealed weapons, he said, will continue to be banned from public buildings lacking metal detectors or posted signs prohibiting firearms.

The proposal comes one year after a high-profile lawsuit involving a woman who openly-carried a .38-caliber revolver while visiting a library in Las Vegas with her three children. The woman, Michelle Flores, lost her library privileges after she refused to leave while protesting the branch’s policy prohibiting openly carried firearms.

An attorney for the Las Vegas-Clark County Library District argued SB 175 only applies to cities, counties and towns — not libraries. The judge in that case agreed.

“How is it helping our law-abiding citizens when a mother with three children — and this was a case that happened a year or so ago — cannot openly carry a handgun while walking into a library to make sure she and her children are safe?” he said. “Criminals do not follow gun laws. They are not going to follow this bill if we pass it today. We are limiting the State and Federal Constitutional rights of law-abiding citizens in this State. We should not do this.”

Other opponents criticized the bill’s language for failing to carve out an exception for parking lots.

“A person is in violation of the law simply by driving into the area with a gun in their vehicle to drop off a child to go to the library,” said Sen. James Settlemeyer, R-Minden, during floor session Tuesday. “I find that to be problematic.”

Denis said he agrees with Settlemeyer and others who are concerned about the parking lot issue, but argued it wasn’t a problem his bill should fix.

“I brought this bill primarily to re-define libraries as educational institutions,” he said. “This is a much bigger issue that has to do with all weapons, not just in libraries, but in schools and other places. I did not want that to have to be addressed in this bill.”

SB 115 now moves to the Assembly for consideration.