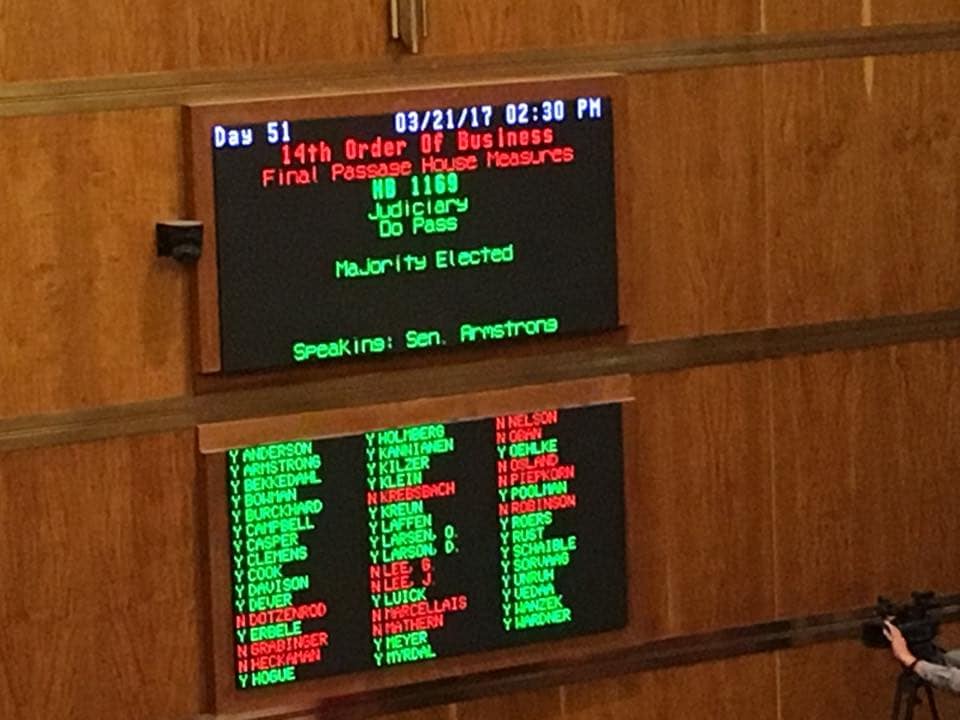 Lawmakers in the North Dakota Senate on Tuesday gave a big thumbs up to a measure to allow permitless concealed carry in the state, sending the proposal to Gov. Doug Burgum.

House Bill 1169 would codify the right of law-abiding North Dakota residents to carry a concealed handgun without first obtaining a permit. It passed the House last month in an 83-9 landslide and the Senate this week 34-13.

“This is a huge victory for liberty here in North Dakota,” said the bill’s sponsor, Rep. Rick Becker, R-Bismarck.  “The legislature has reaffirmed the true intent of the Second Amendment.”

Becker’s proposal would leave the state’s current concealed carry permit scheme in place but allow that any resident with a state-issued ID for at least a year and is not prohibited from possessing a firearm could carry a handgun without having such a permit. It would also add a duty to inform police of their firearm during encounters such as traffic stops.

North Dakota is a “shall-issue” state with permits granted through the attorney general’s Bureau of Criminal Investigation. As of the end of 2016, there were 48,700 active permits on file in two different classes. Permits typically cost $60 plus testing fees and take up to 60 days to issue. Open carry is not legal in the state without a permit.

In floor debate in the Senate this week, Sen. Carolyn Nelson, D-Fargo, voiced concerns over the measure, saying if you can read you can pass the current test to get a concealed carry permit.

“I live in downtown Fargo. There are some folks down there that, quite frankly, if they are carrying, I’d be more scared than I am now,” Nelson said. “I just don’t think this particular bill in necessary.”

No law enforcement agency testified against the HB 1169 in committee.

While the bill has the support of the National Rifle Association, gun control groups are urging Burgum, a Republican who was “A” rated by the NRA, to veto the proposal.

“If this bill becomes law, it will take away our reasonable permit requirement, letting violent people and people with no safety training carry hidden, loaded handguns in our streets,” said Cathy Lee with the Montana chapter of Moms Demand Action, pointing to a survey funded by the group that found most polled support the state’s permit requirement. “The vast majority of us, including more than three in four North Dakota gun owners, recognize that our permit requirement makes sense, and I hope the governor will veto this dangerous bill so that requirement stays in place.”