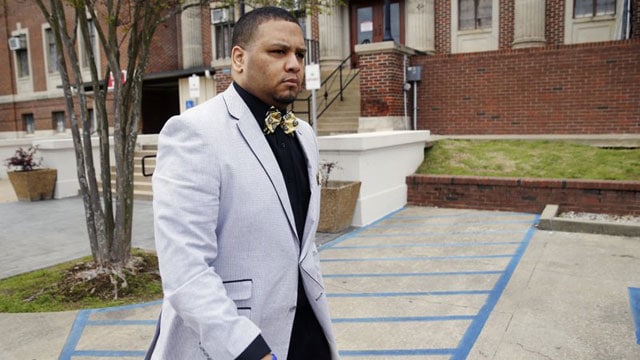 Derrick Stafford on his way to court. (Photo: Associated Press)

The jury trial began this week for one of the Louisiana deputies involved in a November 2015 shooting in Marksville that left a six-year-old autistic boy dead.

Deputy Marshal Derrick Stafford, 33, and Norris Greenhouse, Jr., 25, are each charged with second-degree murder for the death of Jeremy Mardis, as well as attempted second-degree murder of the boy’s father, Christopher Few. Stafford’s trial started this week, while Greenhouse’s trial will begin later this year, the Associated Press reports.

The deadly confrontation occurred on Nov. 3, 2015, as the officers attempted to stop Few, who was driving while Mardis was buckled in the front passenger seat. But the accounts of what led to the traffic stop and subsequent shooting varied considerably between the prosecution and defense.

An autopsy revealed Mardis was killed after being struck by four of the 18 bullets fired by the officers, who were unaware the boy was in the front seat when they opened fire. Few, though also struck by gunfire, survived and was painted as “the author of that child’s fate” by defense attorney Jonathan Goins.

Goins told the court that Few was driving dangerously and committed more than a dozen traffic infractions as he led the officers on a two-mile, high-speed chase and even rammed his vehicle into Greenhouse’s vehicle. However, a state detective testified that there was no physical evidence of such a collision occurring.

Additionally, the prosecution argued the officers were not in any danger when they opened fire. In fact, body cam footage shows Few with his hands held up and out of the driver’s side window before shots were fired.

The video was shown to the court as the boy’s family wept and several jurors wiped tears from their eyes.

Assistant Attorney General Matthew Derbes also argued that Few, who had been drinking at a bar before the incident, feared he was going to lose custody of his son if he was stopped and arrested.

“He’s going to tell you it’s the biggest mistake of his life,” Derbes said of Few, speaking to the jurors.

Tests revealed Few had alcohol, methamphetamine, and Xanax in his system at the time of the shooting, though a bartender testified that the night in question Few had two beers and one shot but was not intoxicated.

The ballistics report traced 14 spent shell casings to Stafford’s gun and the remaining four casings to Greenhouse’s gun. Three of the bullet fragments recovered from the child’s body were traced to Stafford’s gun, while the remaining fragment could not be traced to either officer’s weapon. The report also showed that none of the shots struck Few’s vehicle from either the front or back but rather all 18 bullets hit the side of the car, which according to the prosecution, further reiterated that the officers were not in danger when they opened fire.