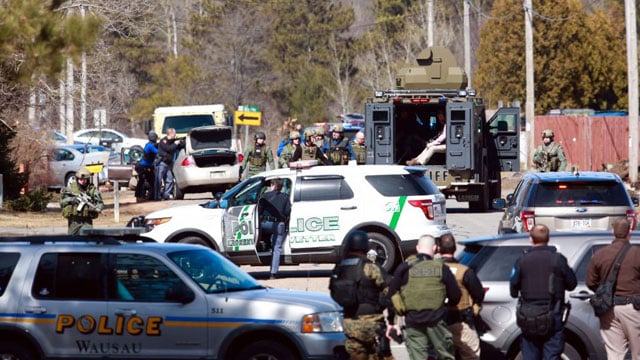 Details of the incident, which spanned three cities, have thus far remained scarce, but Everest Metro Police Chief Wally Sparks confirmed in a press conference that the suspect, whose name was not released, is in police custody and there is no current threat to the community. Sparks said the names of the victims have not been made public and asked for time to notify the families.

What is known is that the incident started at a bank in Rothschild around noon. Police were called to the business about a domestic situation that was unfolding, but by the time they arrived on the scene, the suspect was gone, and two people had been shot. Soon thereafter, police in nearby Wausau were called after shots were fired at a law firm. A short time later, a third round of calls came in from Weston, where the suspect holed up at an apartment complex and engaged in a more than three-hour standoff with police.

Kelly Hanson, 21, who lives at the apartment complex, told reporters that she looked outside of her apartment window and saw a squad car. Moments later, she heard a gunshot and saw an officer fall to the ground. Hanson said other officers rushed the injured officer into the safety of an armored SWAT vehicle, then took him away. Hanson said she was unsure whether the officer was dead or alive.

She said she stayed in her apartment, as instructed by authorities, and heard about 10 shots ring out just before 5 p.m. She said it was at that time she started to “freak out.” It’s unclear who fired the volley, but police confirmed the suspect, who was not reported injured, was in custody by 5 p.m.

“It’s tragic that had to happen, but I think they did a good job out here today,” Hanson said.

The incident led to a response from a “significant amount of law enforcement,” Sparks said, including the Federal Bureau of Investigation. Additionally, a lockdown of nearby schools and hospitals was initiated, but Sparks confirmed there was never believed to be any danger to these facilities and it was simply a precautionary measure.

Jason Smith, a deputy administrator for the state Department of Justice’s Division of Criminal Investigation, said additional details surrounding the incident are expected to be released Thursday.

“Thoughts and prayers to all the victims and their families,” Sparks said. “Please keep them in your prayers and be with our officers.”