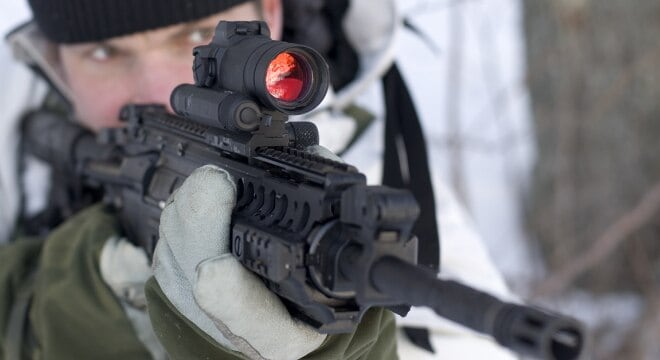 Virginia-based Aimpoint announced Wednesday they have been awarded a contract to supply sights to the U.S. Army, along with adapters to allow their use on multiple platforms.

The contract is for 30,000 of the company’s latest CompM4s reflex sights– type classified by the Army as the M68 Close Combat Optic– complete with killFlash anti-reflection devices, lens covers and adapters to allow the sight’s use on not only standard personal weapons such as the M16/M4 series, but also the M249 squad automatic weapon and M240 general purpose machine gun.

The Comp-series red dot sight first appeared in 1995 and was adopted by the military in 1997, with more than a million examples produced since then.

“The CompM4s is the standard by which all other reflex sights are measured,” said Aimpoint President Brian Lisankie in a statement. “These optics are designed to function with complete reliability and accuracy under the harshest conditions, and do so with near-legendary levels of ruggedness and dependability.”

Aimpoint has also made inroads to bring other systems to the Army, with soldiers at Fort Benning recently utilizing one of the company’s FCS12 sights which incorporates a ballistic computer, laser rangefinder and parallax free optical channel in tests on the M3 84mm Carl Gustaf recoilless rifle.