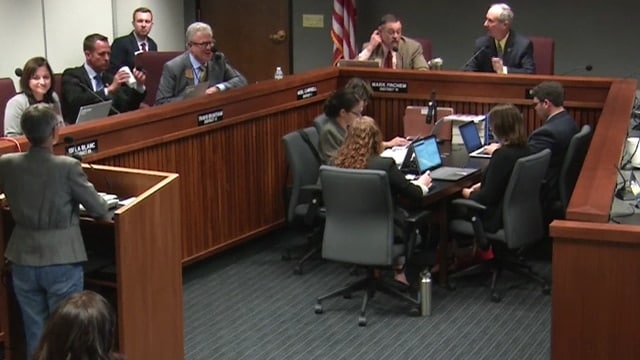 An Arizona panel narrowly approved a measure Tuesday outlawing any future background check mandates for the transfer of private property — including firearms.

The House Federalism, Property Rights and Public Policy Committee voted 5-4 to advance Senate Bill 1122 to the full chamber for consideration, much to the dismay of the state’s gun control community.

“Our legislators should stop playing games with these vaguely worded, unnecessary bills and actually do something to address the real gun violence problem in our communities,” said Annie LaMoureaux, a volunteer with the Arizona chapter of Moms Demand Action for Gun Sense in America, while testifying before the committee Tuesday.

The one-page proposal, authored by Sierra Vista resident Jere Fredenburgh, specifically prohibits a city, town or county from requiring “as a condition of a private sale, gift, donation or other transfer of personal property, the owner of the personal property search or facilitate the search of any federal or state databases and shall not require that a third party be involved.”

Some legislators on the panel grilled Fredenburgh on the motivation behind the bill, insisting the private sale of other personal property — such as cars and RVs — involves registering the new owner with the state, also considered a third party, and cannot be avoided.

“You know … I support gun rights, I always have and we don’t have a prohibition on this right now and I really feel this bill is broadly overwritten and broadly construed,” Rep. Noel Campbell, R-Prescott, said. “I think the way I read it … you cannot prohibit when selling a car to a third party one way or another. The state is going to know about it.”

Rep. Mark Finchem, R-Oro Valley, called the argument a “red herring,” defending the bill’s brevity as “less is more in this particular case.”

Committee Chairman Rep. Bob Thorpe, R-Flagstaff, sided with Finchem, noting registering cars with the state is a requirement of the buyer — not the seller.

Campbell and other dissenting committee votes hinged on the proposal’s vague wording as a bill “in search of a problem that doesn’t exist right now.”

“I know the underlying thought about this bill,” he said, noting he wouldn’t support any future legislation mandating universal background checks. “I would oppose that, but this is a badly written, overly broad bill.”

Rep. David Stringer, R-Prescott, pushed back, saying “there’s nothing wrong with this bill” before casting his yes vote.

SB 1122 now moves to the full House for consideration.

The measure passed the Senate 16-14 earlier this month despite warning from Democratic lawmakers, including Sen. Steve Farley, D-Tucson, who called it a “bad idea.”

“This is over-wrought,” he said during a March 1 session. “This does not allow local cities or counties to do any type of a background check for any exchange of property including cars. This is being decided before the state Supreme Court right now so let’s not rush it. We should not be deciding for a city what’s best for the public safety of its citizens.”

The case Farley referenced pits Tucson against the state over its destruction of seized or surrendered firearms. The policy preempts state law that requires such firearms be sold, though a court decision in favor of Tucson would quash SB 1122, Farley said.

“The city of Tucson is arguing that gun regulations are a matter of local control,” he said. “I think we should wait to see what the court decides before we make any more laws that could be invalidated.”

The Arizona Supreme Court has not yet issued a ruling in the case.