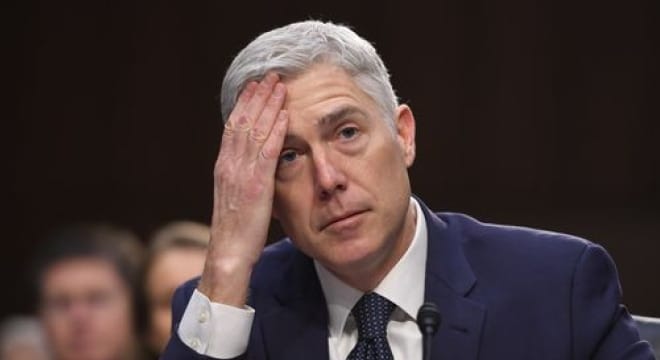 Judge Neil Gorsuch returned to several issues on his third day of hearings in front of the Senate Judiciary Committee on Wednesday (Photo: Jack Gruber/USA Today)

Judge Neil Gorsuch on Wednesday found himself again on the receiving end of questions concerning gun rights during the third day of hearings to be an associate justice on the Supreme Court.

In just over 10-hours in front of the Senate Judiciary Committee, the Colorado native covered a number of topics including — in a reprisal of Tuesday’s conversation on a past Supreme Court gun rights precedent– the 2008 Heller case.

Connecticut Democrat U.S. Sen. Richard Blumenthal broached the topic of the Second Amendment while referencing the 2012 Sandy Hook shooting that occurred in his state. Moving on to a selection of the late Justice Scalia’s remarks in the Heller case, the Connecticut lawmaker queried Gorsuch about gun control.

Blumenthal rephrased the argument, again quoting from Heller, saying the Second Amendment did not include, “‘dangerous and unusual weapons’ such as ‘weapons that are most useful in military service — M16 rifles’ and the like. Do you agree?”

Blumenthal pressed, asking if Heller cast doubt on prohibitions on the possession of guns by felons or the mentally ill, or laws on carrying guns in schools and government buildings.

The jurist’s answers left Blumenthal to characterize Gorsuch as being very “adroit” and not as forthcoming as judges that were nominated in the past, advising him that he would submit additional written questions to Gorsuch before making up his mind on how to vote on his confirmation.

Besides the exchange on Heller, the topic of felons with illegal guns was posed to Gorsuch by Judiciary Committee Chair, U.S. Sen. Chuck Grassley, R-Iowa, who asked the appellate judge about a 2012 case he ruled on. While Gorsuch agreed with the other two judges on the panel in affirming the lower court’s decision, he wrote a separate concurrence pointing out the potentially confusing grammar of the charge against the defendant.

Gorsuch explained his action to Grassley by saying he felt the obligation to point out the meaning of the legal text saying the law should be “sufficiently clear” and defendants should know “we are not putting them in prison on the basis of some secret law, some hidden, unexpressed intentions, or some intentions that are very hard to find in the fine print of some book that’s not available widely — but on the basis of what’s in the statutory books that we are all charged with knowing.”

Republicans are hoping to refer Gorsuch to a full floor vote in early April with Majority Leader Mitch McConnell reportedly confident he would be confirmed to the Supreme Court before the Senate’s Easter recess.