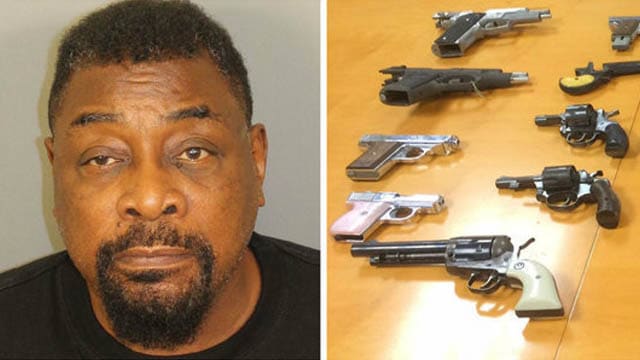 A former police department custodian in Alabama was sentenced Tuesday to six-and-a-half years in federal prison after he stole as many as 50 guns from the department’s evidence room.

Roy Ellis Hunter, 70, was indicted last year on two counts of being a felon in possession of firearms, which he took from the Fairfield Police Department and sold out of his home, according to court documents. He pleaded guilty to one count and will report to prison on May 15.

On June 4, 2015, at Hunter’s home in Fairfield, Alabama, an ATF informant bought a Cobra .380-caliber pistol, an FIE .32-caliber revolver, an Iberia .40-caliber pistol and a Norinco 9 mm pistol from Hunter for $800. The transaction was monitored by federal agents and recorded.

A few weeks later, the same informant paid Hunter $4,000 for 15 guns, one of which was in a clear plastic bag marked “evidence.” The next day, agents arrested Hunter and found 31 more guns, ammo, drugs and a decorative sword in Hunter’s home — all of it presumed to be stolen from the Fairfield Police Department’s evidence room, according to Hunter’s plea.

“Roy Hunter was stealing guns from a police department and then selling them to persons who could not legally buy a firearm,” said Acting U.S. Attorney Robert O. Posey, according to a Department of Justice release.

“I am happy that we were able to stop this and prevent more of them from being sold to criminals,” said ATF Assistant Special Agent in Charge David Hyche.

A former member of the Outcast Motorcycle Club, Hunter was convicted on federal racketeering, cocaine distribution, and counterfeiting charges in the mid 1980’s.

At the end of his sentence, Hunter will be subject to two years of supervised release.