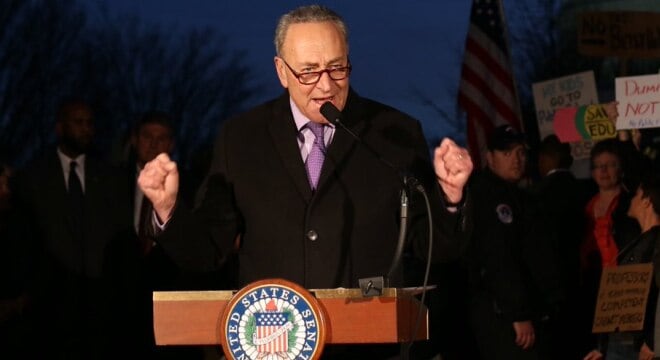 While the Senate Judiciary Committee wrapped up a final day of hearings on Supreme Court nominee Neil Gorsuch, Democrats began a push to block a floor vote.

Gorsuch, currently a federal appeals court judge based in Colorado, navigated over 20 hours of hearings this week and as witnesses weighed in for and against him with the committee on Thursday, U.S. Sen. Chuck Schumer, D-NY., announced he had made up his mind.

“After careful deliberation, I have concluded that I cannot support Judge Neil Gorsuch’s nomination to the Supreme Court,” said Schumer. “His nomination will face a cloture vote, and as I’ve said, he will have to earn 60 votes for confirmation. My vote will be “No.”’

Republicans currently count 52 heads in the Senate and would need to retain all those votes while convincing at least eight Democrats or Independents to cross over to muscle past Schumer’s promised delaying tactics.

“Judge Gorsuch’s record shows that he sides far too often with the powerful few over everyday Americans trying to get a fair shake,” said Schumer on the Senate floor.

Meanwhile, the Judiciary panel heard testimony from advocacy groups, former law clerks, and colleagues of Gorsuch in a final day of hearings. While gun politics remained absent in most cases, at least one speaker addressed the subject in graphic detail.

Sandy Phillips, who lost her daughter Jessi in the Aurora, Colorado theater shooting and has advocated on Capitol Hill numerous times on gun violence since 2012, weighed in with the panel during emotional testimony. Phillips, who sued several retailers the shooter legally purchased ammunition and accessories from and lost, voiced concerns about the 2005 Protection of Lawful Commerce in Arms Act, which insulates gun makers from spurious lawsuits.

“Our Second Amendment begins with the phrase ‘a well-regulated’ but guns are not well-regulated,” said Phillips. “Our lack of strong federal laws allow them to acquire guns too easily.”

Phillips called on the panel to look at the Gorsuch’s record and statements, saying, “This committee must know, does this nominee believe the Second Amendment has limits? Does the nominee recognize that it does not override any other constitutional rights like my daughter’s to live in a safe community?”

Later, U.S. Sen. Richard Blumenthal, D-Conn., addressed Phillips directly, saying that Gorsuch in his testimony when asked about the 2008 Heller Supreme Court case “failed to agree with me in my reading of the statute and used the same kind of disclaimer that he did in response to numerous other questions I put to him that he wouldn’t answer about a particular case or controversy.”

The Republican-led committee is expected to vote on Gorsuch in coming days, and Senate Majority Leader Mitch McConnell, R-Ky., has advised a floor vote is expected before Easter. In an interview with the Associated Press on Tuesday, McConnell hinted at changing the chamber’s rules to allow Gorsuch to pass with a simple majority vote, negating threats from Senate Dems as long as the GOP unifies in support of President Trump’s nominee.