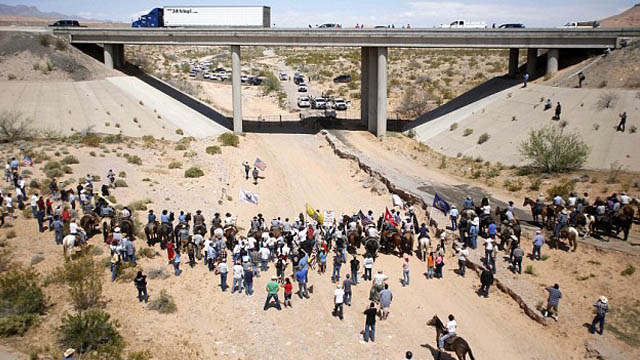 The “Battle of Bunkerville” lasted six days in April 2014, eventually ending without any gunfire. (Photo: Reuters)

Posing as documentary filmmakers, FBI agents gathered footage played in court this week in the trial of six men who participated in a nearly weeklong standoff with federal agents near Cliven Bundy’s Nevada cattle ranch in April 2014.

FBI Special Agent Charles Johnson gave detailed testimony this week about the footage, said to be shot for a production called “America Reloaded,” which effectively drew statements from at least three of the men on trial, according to reports.

In footage played Thursday, defendant Gregory Burleson told the undercover agents he was ready to kill federal agents, and was disappointed things ended without bloodshed, according to KLAS-TV. The day before, a federal informant testified that Burleson was a paid FBI informant in 2012, though it’s unclear when or if he stopped working for the feds.

“What I was looking for was just a show of support,” defendant Scott Drexler told the undercover filmmakers, according to the Las Vegas Review-Journal. “It seems as if when there are armed people around a situation, then the authorities have to be a little more civil, have to treat you like a person. If nobody is facing any kind of consequences for their actions, they can just do whatever they want.”

The “Battle of Bunkerville” started after Bundy refused to pay more than two decades of federal fees, which he racked up after allowing his cows to graze on public lands. Bureau of Land Management officials went to Bundy’s ranch to round up his cattle in lieu of the $1 million in fees. But Bundy, his sons, and dozens of others showed up to stop the BLM agents, in what prosecutors called “a massive armed assault against federal law enforcement officers.”

“We had the cowboys and Cliven all down below us, and BLM on the other side of the gate,” said Drexler in the footage, adding that when BLM “started moving to the gate with weapons and full combat gear, it started to get a little bit tense.”

One of the undercover agents asked him what would happen if “somebody just farted.” Drexler said, “I don’t think a loud fart woulda put anyone off, but a gunshot sure would have.”

“I want to stand for the Constitution,” said Eric Parker in the video. “I don’t think you have to be in the militia for that.”

No shots were fired, and the standoff ended peacefully when BLM officials abandoned their round-up efforts. A total of 19 people have been arrested and jailed in connection with the six-day standoff. The current trial is the first of three expected to happen this year.