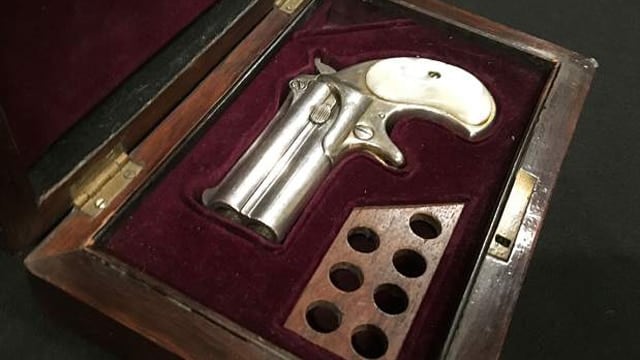 The Remington derringer alleged to be recovered from the hotel room where Doc Holliday died on Nov. 8, 1887 in Glenwood Springs, Colo. (Photo:Chelsea Self/Glenwood Springs Post Independent)

The Glenwood Springs Historical Society spent $84,000 on a Remington derringer recovered from the hotel room in town where infamous gunslinger and gambler Doc Holliday died in 1887.

At least, that’s what board members thought when they announced the purchase of the artifact earlier this month.

Now, according to a report from the Post Independent published Wednesday, the society isn’t so sure about the gun’s authenticity.

“We all love a good story,” society Executive Director Bill Kight told the newspaper. “Weave a tale of Big Nose Kate gifting a Remington derringer to Doc Holliday that’s next to impossible to prove or disprove.”

E. Dixon Larson, a Utah-based gun dealer, allegedly bought the derringer from relatives of hotel bartender William G. Wells in 1968, Kight said. Through research into Larson’s past, however, it’s been revealed the now-deceased collector boasted about an arsenal of antique firearms once owned by celebrity outlaws long believed forgeries.

The story goes a destitute and dying Holliday stopped in Glenwood Springs, 150 miles west of Denver, in November 1887 to treat his tuberculosis near the area’s hot springs. Instead, he died in his room at Hotel Glenwood, the engraved derringer at his side — a gift from common law wife Mary Katherine “Big Nose Kate” Horony-Cummings.

Wells collected the gun as payment for Holliday’s funeral and his family held onto it for more than 80 years until selling to Larson. The gun changed hands in the 1980s, the newspaper reports, before the latest owner, Jason Brierley of Vancouver, bought the gun and offered to sell it to the historical society last year.

The society accepted an $84,000 loan from an anonymous lender and the Post Independent encouraged public donations to help pay for the “priceless artifact.”

“The derringer, Kight believes, and we agree, can be a game-changer for the museum, creating a draw for both visitors and other items linked to Holliday, either on loan or as future acquisitions,” the Post Independent editorial board wrote on March 12, noting Holliday’s connection to the community as its most famous historical resident.

Now, Kight told the newspaper, the society is refunding donations as it continues to “dig deeper” into the gun’s history and plans to hire a weapons expert to verify its authenticity.

“A man’s reputation is judged by one’s words and actions,” he said. “The historical society tried hard to do just that, to peer into Dixon Larson’s past.”