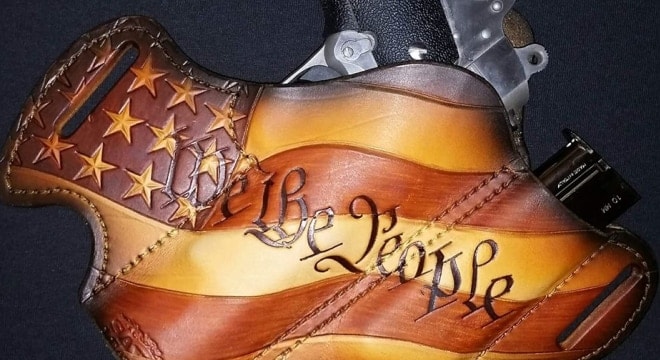 “Gun ownership is both a right and a responsibility, and that responsibility begins with individuals and families,” Burgum said. (Photo: Savoy Leather)

House Bill 1169 codified the right of those with a North Dakota drivers’ license or state-issued ID card to carry a concealed handgun. The bill passed the House last month 83-9 and the Senate this week 34-13. Burgum, who carried an “A” rating from the National Rifle Association during his election campaign last year, contends the measure reaffirms Second Amendment rights.

“North Dakota has a rich heritage of hunting and a culture of deep respect for firearm safety. As a hunter and gun owner myself, I strongly support gun rights for law-abiding citizens,” Burgum said in a statement. “House Bill 1169 allows citizens to exercise their Second Amendment right under the U.S. Constitution. It also is consistent with the North Dakota Constitution, which declares in Article I that all individuals have the inalienable right ‘to keep and bear arms for the defense of their person, family, property, and the state, and for lawful hunting, recreational, and other lawful purposes, which shall not be infringed.’ ”

The new law leaves the state’s current concealed carry permit scheme in place but allows that any resident with a state-issued ID for at least a year and is not prohibited from possessing a firearm could carry a handgun without having such a permit. It also adds a duty to inform police of their firearm during encounters such as traffic stops.

Gun control advocates to include Moms Demand Action and Everytown for Gun Safety opposed the measure and had asked Burgum to veto the legislation. Former Republican Gov. Ed Schafer, the state’s chief executive from 1992 to 2000, had also lent his voice to the opposition.

“I think it’s a mistake. We’re going back to the ‘Old West, high noon, let’s all carry a gun; if we get into an argument…I’m going to start shooting at em’ attitude,” said Schafer.

With the implementation of the new law, North Dakota became at least the 12th state to make obtaining a weapon permit optional when carrying a concealed handgun.