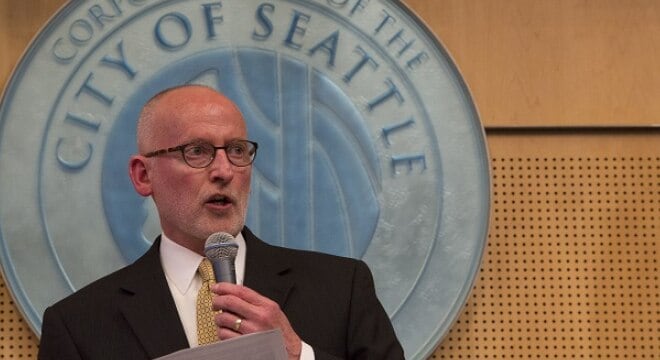 Seattle City Council Member Tim Burgess, pushed a gun tax in 2015 that did not live up to its expected revenue projection the first year. (Photo: Ellen M. Banner/The Seattle Times)

A 2015 tax on guns and ammo that triggered an ongoing lawsuit earned significantly less than what lawmakers expected.

The measure, introduced by City Council President Tim Burgess, was expected to garner as much as $500,000 through a $25 assessment on each modern firearm and up to 5 cents on each round of ammunition sold by retailers in the city. However, the Seattle Times reports the tax generated less than half of that figure.

“During its first year, the firearms and ammunition tax payments received by the City were less than $200,000,” Burgess wrote in an email.

The news comes after months of sandbagging requests from gun rights groups and local media on the figures, contending release of the data could reveal the identity of individual taxpayers and how much they paid, which is protected information under state law.

The tax which was billed as the city’s solution to the $17 million in medical costs from 253 gunshot victims at Harborview Medical Center in 2014, which Seattle underwrites with public funds and was passed by the city council in a unanimous vote. In anticipation of the revenue stream, city officials allocated $275,000 in gun violence research from the annual budget in both 2016 and 2017.

The ordinance, signed by Seattle Mayor Ed Murray, set a levy of $25 per firearm, 2.5 cents per .22 caliber cartridge, and 5 cents apiece for all other rounds of ammunition. The latter added $2 to the average box of handgun ammunition and $12.50 to common 500-round packs of rimfire target ammo. The figures were in addition to the various state and local retail taxes that approach 9.6 percent in the city already.

While some gun retailers moved out of the city to set up operations in the suburbs, taking tax revenue with them, the National Rifle Association, National Shooting Sports Foundation, and Second Amendment Foundation joined forces to take the city to court. The groups argued the tax is an overstep which violates Washington’s preemption law, adopted in 1983, which places sole control over gun statutes under the state legislature.

With litigation pending, Burgess says the tax isn’t being used until the matter is resolved in the courts.

Alan Gottlieb, executive vice president of the Second Amendment Foundation, told Guns.com on Friday that it’s the residents of Seattle who are likely to going to feel the biggest sting from the tax’s effects.

“The city estimated that they would collect between $300,000 and $500,000 dollars. They now admit that they collected less than $200,000. How much less they will not release,” said Gottlieb. “When you add the costs the city has incurred including legal, oversight, enforcement, accounting and enactment the city and taxpayers probably took a big hit. And that is not counting lost revenue from sales tax from people buying guns and ammunition outside the city or lost business and employment taxes.”

This piece has been updated from the original with comment from Gottlieb.