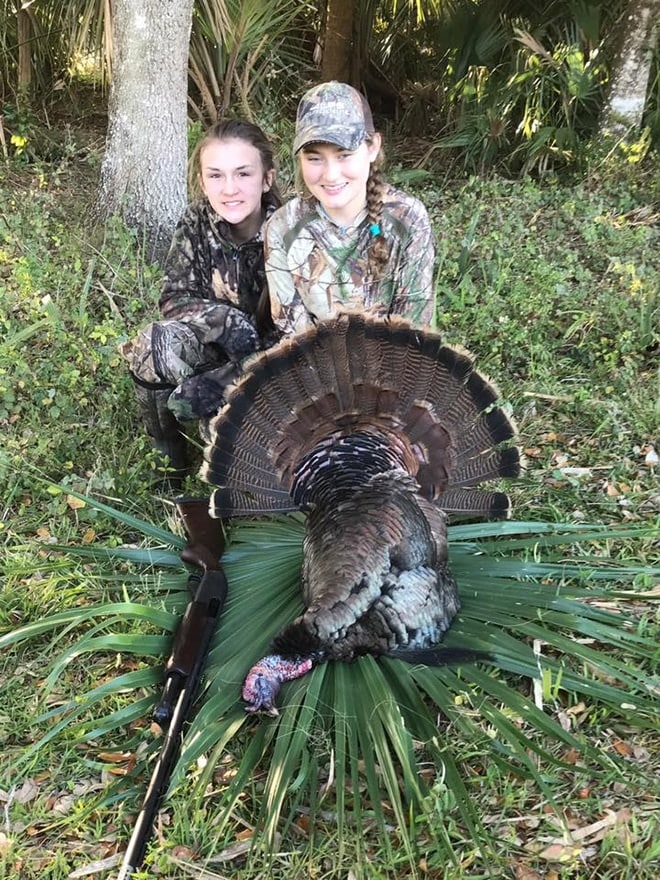 Kylie L. McCrea is already a hunting celebrity at 12 years of age.  She was three when she first fired a rifle under the watchful eye of her father, Eric, now a retired Border Patrol agent.  Today, with the support of Eric, her mother Tori, and a supportive public school, she has amassed some enviable hunting honors.

The turkey Grand Slam is the bagging of four of the major subspecies of wild turkey in the United States in one year. Those species are Eastern, Merriam’s, Rio Grande, and Osceola. Kylie was 11 when she chalked up her third Grand Slam.

Gobblers are just the beginning of Kylie’s hunting adventures.  She’s taken her share of whitetail deer, numerous exotics, and other game, and she also enjoys fishing. Lately, said her dad, she’s really into archery.

There’s just no stopping Kylie’s or her family’s enthusiasm for the outdoors. Tori, the relative latecomer to hunting, started hitting the woods when she was 27 and started dating Eric.  A wedding followed, along with Kylie, and later two sisters, now 10 and 8, who are becoming outdoorspeople in their own right.  “I thought I’d have boys and we’d go hunting together,” said Eric. “Little did I know what God had in store. It’s become our mission to show the world that hunting and the outdoors are great for girls.”

Kylie and her family recently adopted a new member into their tribe.  At the February National Wild Turkey Federation (NWTF) convention in Nashville, a representative with Sky High for St. Jude, a shooting-oriented charitable foundation for children with cancer, brought a visitor to the booth of their family business, Country Girls Outdoors. 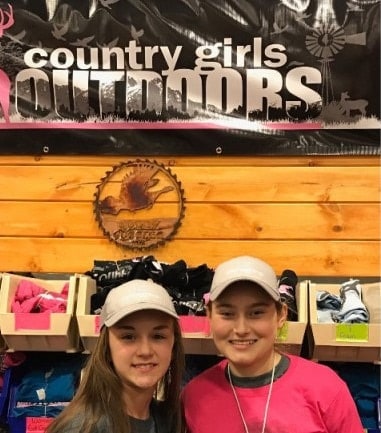 Kylie and Megan at the Country Girls Outdoor booth at the NWTF Convention in Nashville, (Photo: Eve Flanigan)

With the representative was Megan Vess, 15. She’s from North Carolina, but was in the area because it has St. Jude’s Hospital.  She came to the convention to connect with others who share her interest in hunting. Vess was diagnosed with leukemia at age 10.  In December 2016, an exam revealed unsettling news: a tumor, with octopus-like tentacles, had developed in her brain.  Surgery was performed to remove much, but not all of the tumor.  She is now considered to have Stage IV glioblastoma, and is receiving radiation treatments.

In the swarm of activity and humanity that is the NWTF Convention, Megan found the booth of McCrea’s Country Girls Outdoors. “Out of 700 vendors, we were the only one focused on girls,” Eric said. Megan came to the booth with the intent to get a tee shirt.  Upon meeting Kylie, she mentioned that she’d been hunting before but missed having girl friends who hunted.  The connection was instantaneous, and the pair talked, and talked, and talked.

That was February 17, 2017. “Next thing you know,” Eric said, “21 hunts had been donated.” As of this writing, less than five weeks later, Megan and Kylie are in Florida, and Megan has already realized her dream of killing her own gobbler, not to mention other game.  It’s a new but tight friendship, and despite her health challenges, Megan has set a personal goal of introducing other girls from St. Jude to the world of hunting.

Megan begins an additional treatment regimen of an autoimmune medication before the end of March.  Whether she will be able to continue hunting during this therapy remains to be seen.  So, she and the McCrea family are squeezing in all the nationwide travel they can, hunting every day when the schedule allows.

“We give all the glory to God. This is the beginning of His plan and it’s about two girls who are on a journey. In the weeks before the trip, they talked every day—facetime, text, all the time,” Eric said.

The McCreas’ fervor for hunting and kindness is obvious. But the question remained, how does Kylie complete her schoolwork? “We have an open dialogue with the Williamson County School District,” said Eric. “They work with us to be sure the schoolwork isn’t missed.  None of the girls are allowed to get below a 95, or they won’t be hunting.”

In addition to the obvious parental devotion, it’s a very unique and special set of kindnesses upon kindnesses that have made the story of Kylie and Megan’s friendship possible. Anyone wishing to support Megan in the realization of her hunting dreams can donate through the GoFundMe page set up by Eric. Some levels of donation receive a decal and/or shirt designed by the girls.