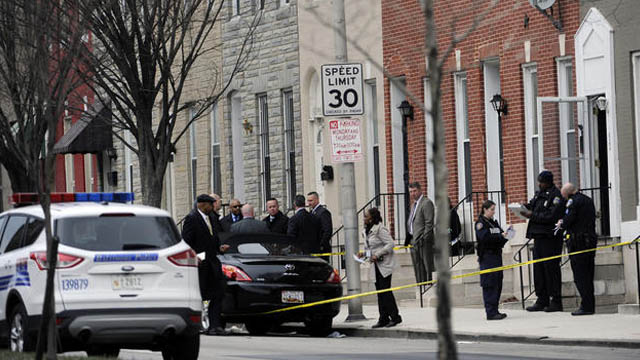 Baltimore police on the scene of the police involved shooting Friday morning in the Sandtown-Winchester neighborhood in Baltimore. (Photo: Kim Hairston/Baltimore Sun)

A man who barricaded himself in a Baltimore home and threatened two small children with a butcher knife was shot and killed by a SWAT team member Friday morning.

The 39-year-old man was homeless, but a family member let him spend the night at their home, according to the Baltimore Sun. The family called police around 6:45 a.m. and told them they thought the man was on drugs, and that he was “acting erratically.”

Responding officers said he brandished the knife toward a 4-year-old girl and a 1-year-old boy. They called in the SWAT team and tried to negotiate with the man for about an hour, but it all ended when a SWAT officer shot him, fearing for the lives of the children.

“Out of fear for the absolute safety of those children who had a knife in close proximity to them, on their bodies, being pointed at their bodies, officers were forced to fire a round,” said police spokesman T.J. Smith.

The children were not injured in the incident, nor were any other family members. Smith said the family was distraught by the death of their relative, but “grateful” their children were safe.

The officer who fired the shot was wearing a body camera during the incident. A 14-year veteran, the officer was placed on paid administrative leave.