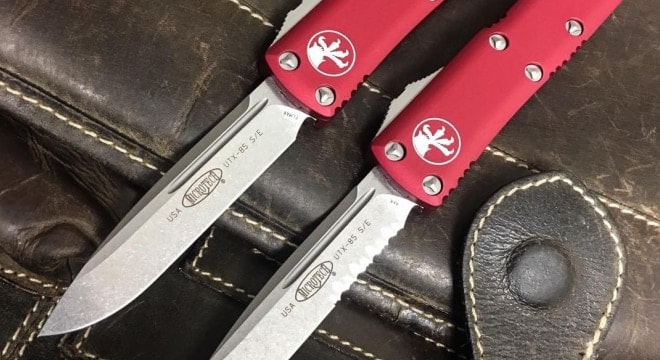 Colorado lawmakers backed their first ban on “mechanical knives” in 1951, and reversed themselves by a veto-proof margin this year. (Photo: Microtech)

The measure, SB17-008, legalizes possession of the knives which had been deemed “illegal weapons” under state law for decades. The measure passed the Senate in February by a 32-3 vote and the House 59-6 last month. Hickenlooper, a Democrat with a history of signing anti-gun measures, signed the bill without comment on March 23.

The bill’s House sponsor, Rep. Steve Lebsock, D-Thornton, said it came as an effort to carve away “ridiculous language in state statutes” and pointed out during the legislative process that huge kitchen knives were legal.

The new law will strike “gravity knife” and “switchblade knife” from the definitions of what constitutes an illegal weapon while keeping blackjacks, gas guns and metallic knuckles on the list.

Under Colorado’s previous guidelines, possession of such a knife was a Class 1 misdemeanor, punishable by a much as 18 months imprisonment and a $5,000 fine.

The ban was so old, in fact, that it beat the Broncos to Denver by a decade. In a legislative council paper on the state’s prohibition, researchers noted the knives were “originally popularized by classic movies such as West Side Story and Rebel Without a Cause.”

According to the American Knife and Tool Institute, 14 other states have bans on the sale and use of automatic, or switchblade, knives. A repeal of Virginia’s ban was vetoed last month while a state court upheld a prohibition in Pennsylvania.