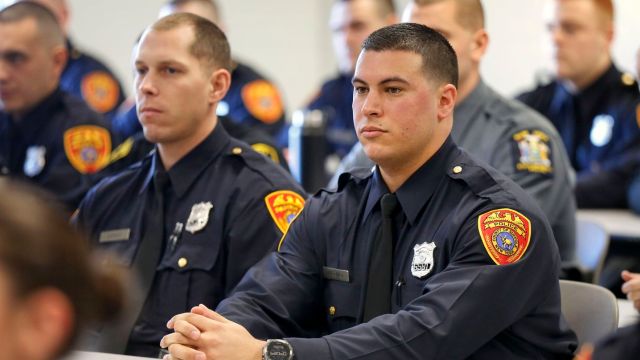 Matias Ferreira fulfilled a lifelong dream Friday when he was sworn in as an officer with the Suffolk County Police Department, but Ferreira also made history by becoming the first fully active double amputee to join the force.

Ferreira said the class was supportive of him and, in fact, elected him class president.

Ferreira is a United States Marines veteran who lost both of his legs when he stepped on an IED while serving in Afghanistan in 2011. But Ferreira, although it was offered, did not receive any special treatment during his police training and completed the physical challenges just the same – or better – than his classmates.

“I was given a second chance,” Ferreira told Newsday in an interview that can be watched here. “Not many people survive an IED blast like I did. I don’t want to be one of the guys who just kind of gives up on themselves.”

Ferreira was one of 59 officers sworn in Friday.

“On behalf of the entire Suffolk County Police Department, we are honored to have these young men and women joining our ranks tomorrow and dedicating their careers to serving the residents of Suffolk County,” Police Commissioner Timothy D. Sini said. “With their hard work, determination and bravery, we will continue to move this department forward and make Suffolk County an even safer place to live.”