Have women and small-framed shooters influenced the 9mm's rise to the top? A woman takes aim at a target during a shooting event hosted during the National Rifle Association’s Annual Meeting in 2016. (Photo: Jacki Billings)

The 9mm’s popularity has risen to epic proportions, shoving both the .45 ACP and the .40 S&W to the sidelines in terms of sales. Overt ballistic advantages of the modern day 9mm provided the momentum the round needed to gain the top spot, but a more subtle influence has brewed under the surface — women.

Ladies have proven to be a veritable buying force within the industry. Though the most recent study conducted by the National Shooting Sports Foundation on female consumers is now three years old, that report concluded that women were focusing their purchases on 9mm semi-automatic handguns. At that time, just under 40 percent of polled female gun owners claimed 9mm as the most owned semi-automatic round.

With an influx of women entering the target shooting and handgun arena between the years of 2001 and 2010, it’s not unreasonable that the need for an accurate caliber with less punch would come out on top over calibers like the power packing .45 ACP.

“The truth is that the capability of the (9mm) rounds have improved since many of the leaders in the training community formed their opinions,” Rob Pincus, renowned firearms trainer and spearhead behind the newly introduced Avidity Arms, told Guns.com.

“It has been helpful that many new shooters, including a higher percentage of women than ever before, have joined the ranks of those interested in guns as defensive tools. That has not only forced a re-think, it has also given permission to some of the crustier .45 ACP hangers-on to allow 9mm to have some legitimacy without giving in entirely,” he said. 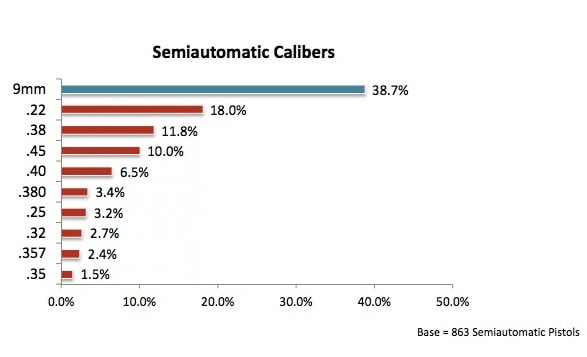 The NSSF Report on Women Gun Owners published in 2015 showcased the top calibers owned by women, with the 9mm earning the top spot. (Photo: NSSF)

Modern technology has given the 9mm the leg up, increasing terminal effectiveness without sacrificing its versatility.

“9mm is a bit of a superhero in my book,” Rachel VandeVoort, Trade Relations Manager for Kimber told Tactical Life. “Thanks largely to advancements in ammunition, it is a caliber that is the epitome of versatility by lending power and ease of handling to most any firearm; characteristics highly valued when bringing new gun owners into the mix or encouraging growth in smaller-caliber shooters.”

The 9mm’s performance matched with its ability to pair well with smaller-framed shooters is also elevating the round’s notoriety within law enforcement.

Officers in one Ohio police department recently swapped out their venerable Smith & Wesson M&P .45s for the 9mm sibling. Columbus Police Chief Ricky Boren cited a couple reasons for the trade, but the increase in small-framed shooters was among the top justifications.

“You know this is not the age of the 6-foot-5 police officers anymore, weighing 200 and 300 pounds,” Boren told the Ledger Enquirer. “We’re going to a smaller-framed officer in some cases; some weak-handed shooters, both male and female. And we’re seeing problems with the 45s on the range because of the power and the recoil of that weapon.”

Mike Boyle, a law enforcement veteran with well over 20 years experience in policing, said that women and small-framed shooters can benefit from 9mm handgun’s smaller size and reduced recoil; a notion that burly shooters may fail to recognize but smaller stature shooters are sure to notice on the range and in real life.

“Some smaller frame shooters may be better off with a pistol chambered for the 9mm Parabellum than a .40 S&W or .45 ACP,” Boyle wrote in an article for Police One. “That slight increase in bump when shooting the big bores may be imperceptible to larger individuals or shooting enthusiasts, but an accuracy deterrent to smaller officers. I would agree that bigger or faster probably has greater stopping potential, but all that is lost if the shooter cannot put hits on the threat.”

Though women and smaller statured shooters have undoubtedly influenced the 9mm’s meteoric rise, there’s no denying that, overall, the round simply outperforms other traditional defense calibers in terms of recoil, accuracy, capacity and cost.

As Pincus put it, “Personally, I think the 9mm is the best choice for personal defense, regardless of how big, small, strong or tough you are.”