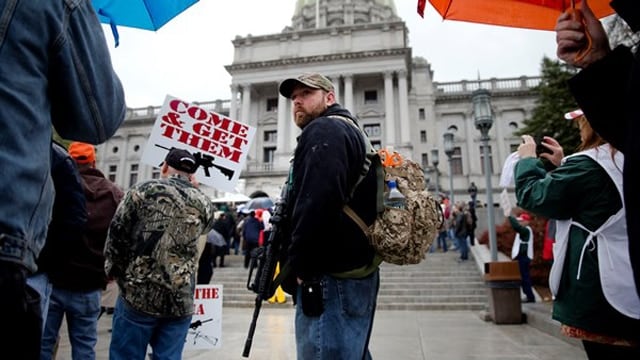 File photo of gun rights advocate Jeff Blair and others demonstrating on the steps of the state Capitol April 29, 2014, in Harrisburg. (Photo: AP Photo)

Senate Bill 5 would prevent the state’s 2,500-plus municipalities from enacting gun ordinances stricter than state law. A similar measure was introduced in the House earlier this month.

Both bills want to correct Act 192 of 2014, which the state’s highest court threw out in a June 2016 ruling because it violated the single subject rule.

In October 2014, state Republicans amended Act 192 into a scrap metal theft bill and sent it to then-Gov. Tom Corbett’s desk. Described at the time as the “strongest firearms preemption statute in the country” by the National Rifle Association, state Democrats, including then-Attorney General Kathleen Kane, balked at the notion of gun rights groups suing municipalities over local firearm ordinances.

“It was very clear why the courts threw Act 192 out,” said Rep. Mark Keller, R-Perry, sponsor of the House proposal, last year. “Not because of this particular law, but because of the single subject matter. That needs to be noted. The law itself is not unconstitutional. It’s the way it was put through.”

Senate Bill 5 remedies the single-subject argument because its stands as its own piece of legislation.

“This legislation seeks to build on the good points of previous versions while including language reflective of discussions aimed at making this piece of legislation better,” said bill sponsor Sen.Wayne Langerholc, Jr., R-Clearfield. “It is my hope that these changes contribute to a solid piece of legislation to enforce our state laws.”