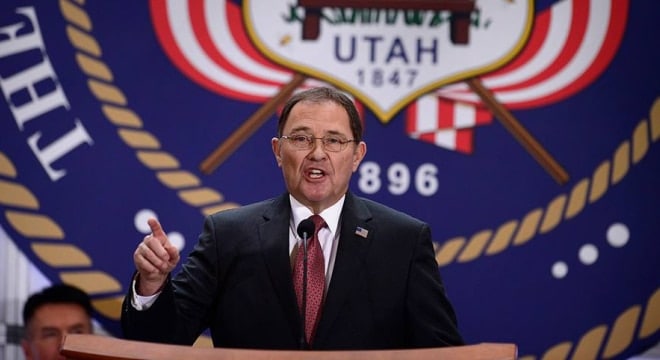 Gov. Gary Herbert approved a measure that will let those 18-20 seek out a provisional concealed carry permit. (Photo: utah.gov/governor)

Republican Gov. Gary Herbert last week signed a proposal into law that will allow 18-20 year olds in Utah to apply to carry a concealed handgun.

The new law, which passed as HB 198 with broad support, establishes a provisional permit system that those at least 18 but not yet 21 can use to carry a concealed handgun. In a press conference prior to the signing, Hebert compared it to military service.

“Juxtapose that over people we put in the military to carry M16s and other weapons with the intent of defending our freedoms and killing people,” said the Governor. “If they’re old enough to do that they’re probably old enough to get some training and carry a concealed weapon.”

The measure’s sponsor crafted the legislation after she was approached by college-aged women in the state who were concerned about rape on campus.

“Our 18-20-year-old adult demographic can currently carry openly, but not on Utah’s college campuses,” said state Rep. Karianne Lisonbee, R-Clearfield. “This bill creates a concealed carry permit for this demographic so they can defend themselves on campus and off.”

Lisonbee’s bill provides that residents 18-20 who apply will pay a $24.75 fee for the shall-issue permit with a mandate that it should be granted to a qualified applicant within 60 days. Nonresidents will pay an extra $10. The provisional permit would expire when the holder reaches 21 years of age, at which point they could obtain a regular permit. A fiscal note filed with the bill estimated that as many as 5,000 individuals would seek out the provisional permit.

According to statistics maintained by the state, 239,296 Utah residents had active concealed firearms permits as of Dec. 31, 2016. Standard permits are $37 and are good for five years.

Utah is one of eight states recognized by the National Conference of State Legislatures as allowing the carrying of concealed weapons on public postsecondary campuses.

Meanwhile, a similar measure to lower handgun carry age to 18 was voted down by the Maine Senate last week.

Another bill signed by Hebert, to drop Utah’s DUI limit to the lowest in the country, as reported by NPR will indirectly impact gun owners because the state’s drunk-driving limits also apply to people carrying firearms.