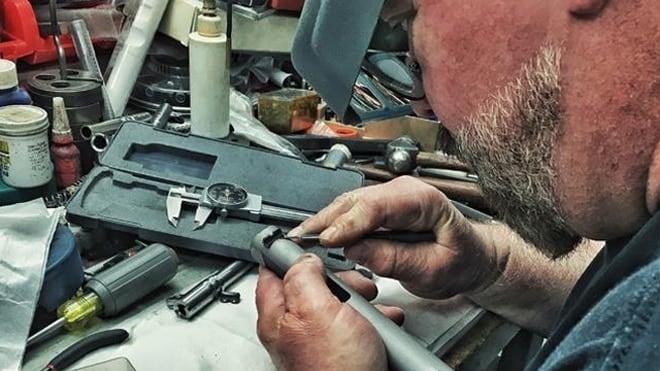 A Colt assembler tinkering with the slide to a 1911 pistol under the haze of an Instagram filter. (Photo: Colt/Facebook)

Colt’s Manufacturing, which emerged from bankruptcy last year, entered into a $23 million expansion project with Connecticut, a state often seen at odds with the gun industry.

Gov. Dannel Malloy’s office said Colt buying its West Hartford headquarters and manufacturing facility, which it had been leasing, is a key part of the gun maker’s growth strategy.

His office added the acquisition of the property will allow Colt to retain 600 current employees and add 100 more jobs over the next five years.

The state’s Department of Economic and Community Development is supporting the project with a $10 million loan, with up to $2 million forgiven if job milestones are met. Also, state funds will be used to help Colt with acquiring the manufacturing facilities and land, valued at $13 million.

“This means hundreds of good paying manufacturing jobs for the people of our state,” Malloy said in Friday’s statement, adding Colt will stay in the area in which it was founded nearly two centuries ago.

Colt’s chief executive officer echoed Malloy’s statements, praising his company’s efforts to transform its business. “Colt is a proud part of Connecticut history and we are committed to our employees and the community,” he said, adding, “Acquiring our headquarters and facility is a key part of this strategy.”

In their agreement, the gun maker maintains its 70-year-old relationship with its union workforce, UAW Local 376. “This transaction is an important step toward securing numerous skilled manufacturing jobs in our state,” said Mike Holmes, the organization’s shop chairman. “It is heartening to know the results that can be achieved by the dedication of parties around the table and we applaud the efforts of everyone involved.”

Colt’s agreement with the state also includes its financial support of the gun safety project Project ChildSafe, which is operated by the gun industry’s trade association, the National Shooting Sports Foundation.

Under that agreement Colt will sponsor state gun safety initiatives by state law enforcement, include gun safety in marketing efforts, and host a safety section on the company’s website.

The agreement may seem antithetical to some, as the state’s leadership and the gun industry have had a contentious relationship for several years.

While maintaining roots in its home state is a theme of the agreement, Colt hasn’t always been as sentimental about preservation. The company was largely ambivalent to state and federal lawmakers in 2014 converting its original manufacturing facility with the iconic onion dome into a national park.

That same year the industry, led by the Connecticut-based NSSF, launched a campaign to oust Malloy in the 2014 election, arguing he pushed jobs out of the state by imposing strict gun control laws that alienated gun manufacturers and gun owners.

In response to the Sandy Hook massacre, Malloy and other state lawmakers passed some of the country’s strictest gun laws, including an assault weapons ban, in 2013. In defense of the legislation, Malloy asserted arguments that the gun industry chose profits over public safety by trying to maintain or loosen gun laws.

The industry — which has some of its biggest players in Connecticut — protested the legislation and testified at the statehouse. Colt even appeared, giving its employees the day off to protest, and threatened to move.

Colt has designed and manufactured firearms in Connecticut since 1847. Leading up to bankruptcy in 2015, the company largely depended on government and military contracts, but has since been trying to appeal more to consumers.