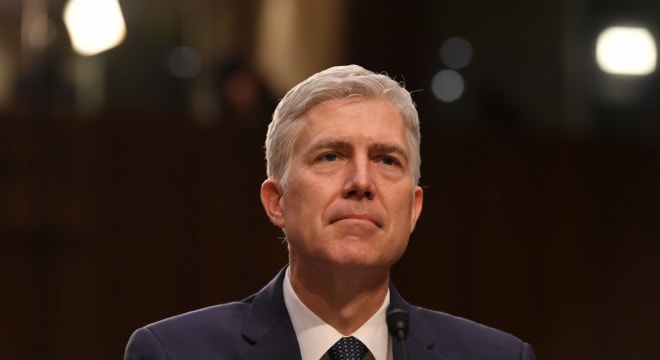 The Senate Judiciary Committee met Monday to consider Gorsuch’s nomination but Democrats, spearheaded by U.S. Sen. Dianne Feinstein, asked for a delay on his vote until next Monday.

Gorsuch, following a week of hearings, was scheduled for debate by the committee to be an Associate Justice of the Supreme Court along with Rod Rosenstein to be the Deputy Attorney General and Rachel Brand to be the Associate Attorney General, which now won’t take place until at least April 3.

Feinstein addressed the short meeting of the committee and railed against Senate inaction last session on Judge Merrick Garland — President Obama’s nomination to fill the seat vacated by the death of Supreme Court Justice Antonin Scalia in February 2016. The California Democrat pointed out that 14 justices were nominated and confirmed to the high court in election years. Feinstein then turned to the topic of “dark money” in the confirmation process, contending $7 million was spent to “sully Judge Garland and that $10 million in dark money was spent to promote Neil Gorsuch.”

“We don’t know whether one individual put in all $10 million. The only thing I know is that the NRA put in a million dollars,” said Feinstein. “Now that sends a loud signal to me.”

Committee Chairman, U.S. Sen. Charles Grassley, R-Iowa, agreed to hold over the three nominations and issued a statement through his office vouching for how qualified he felt Gorsuch was for the bench.

“His resume speaks for itself,” said Grassley. “But last week we got to see up-close how thoughtful, articulate, and humble he is. He is clearly deeply committed to being a fair and impartial Judge. And he isn’t willing to compromise that independence to win votes in the Senate.”

Meanwhile, the NRA advised they would be scoring the vote on Gorsuch for future reference by its members and is spending seven-figure sums aimed at four Senate Democrats facing tough reelections in areas that went to President Trump last November. These include Sens. Claire McCaskill of Missouri, Jon Tester of Montana, Heidi Heitkamp of North Dakota and Joe Donnelly of Indiana.

“Both sides understood that the November presidential election was largely a referendum on the future direction of the U.S. Supreme Court,” said NRA-ILA Executive Director Chris Cox in a message last week in all the organization’s publications. “Our opponents, unfortunately, don’t seem to realize that their side lost.”

Gun control groups are likewise ramping up the pressure on lawmakers to oppose Gorsuch.

Americans for Responsible Solutions, the PAC established by former U.S. Rep. Gabby Giffords, has penned opinion pieces in the past week and, in posting them to social media, made much of the NRA’s support for the jurist.

“The gun lobby is spending one million dollars to support Neil Gorsuch because they want an ally on the bench,” said the group. “If Gorsuch indeed shares the gun lobby’s views -and votes in favor of their agenda, Americans should be very concerned.”

Others are following the same path with the Newtown Action Alliance going so far as to say, “Neil Gorsuch has been bought by the NRA.”

Senate Majority Leader Mitch McConnell has promised that Gorsuch would be approved by the chamber before it breaks for Easter.