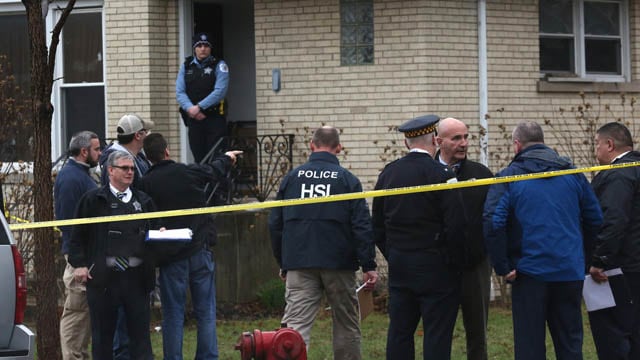 Chicago police were at the home on West Grand Avenue and North Melvina Avenue as many as ten hours after the shooting Monday, according to local reports. (Photo: Nancy Stone/Chicago Tribune)

An Immigration and Customs Enforcement agent shot a man in the arm during an early morning raid at a Chicago home Monday.

ICE said an agent shot 53-year-old Felix Torres after he pointed a gun at agents while they tried to serve a warrant for someone else, DNA Info reported. But family members tell a different story.

“It’s a lie when they say he was holding a gun. He doesn’t even own a gun,” the man’s daughter, Carmen Torres said. “They shot my dad. They shot him, and I don’t know why.”

At least eight family members were in the home during the raid, which happened around 6:20 a.m. on the city’s Northwest Side. Carmen Torres said none of them are undocumented. ICE removed at least one man from the home during the raid — the wounded man’s 23-year-old son. He’s due in court Wednesday for a felony gun charge, but was released by ICE later Monday.

Felix Torres was taken to a local hospital in serious condition.

“I don’t know if there was some sort of mistake here or what,” said the family’s attorney, Thomas Hallock, the Chicago Tribune reported.

“He opened the door and, without cause, they shot him,” he said.

Ald. Carlos Ramirez-Rosa had harsh words for ICE on Monday.

“ICE’s guns blazing raid on a northwest side home filled with sleeping kids is exactly why the City of Chicago should refuse to collaborate with ICE, said Ramirez-Rosa in a statement. “ICE routinely violates the American people’s constitutional rights.”

“Is this our future in Chicago with Donald Trump as president?” asked Ald. Gilbert Villegas.

“I’m conflicted because I haven’t got all the details [of the incident] yet, but from the way this has started to play out, it looks like an overstep by an overzealous ICE agent who’s just trying to follow Trump’s orders,” said Villegas.

In a statement, ICE said its Office of Professional Responsibility will be reviewing the shooting.

“Due to this ongoing review, no further details will be released at this time,” read the statement.