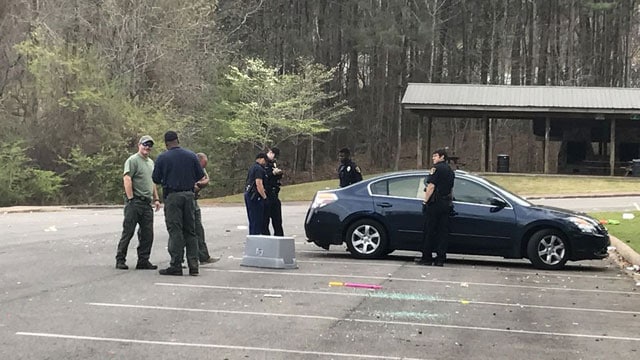 Police gather evidence at the park where the shooting took place. (Photo: AL.com)

What was supposed to be a fun-filled Friday for Birmingham high school seniors ended with two teen girls getting shot after a water balloon fight escalated into violence.

“Unfortunately, what started off pleasant turned into shots being fired and a couple of people being grazed by bullets,” said Birmingham police spokesman Lt. Sean Edwards.

Students who partook in Senior Skip Day were engaged in a water balloon fight at a local park when apparently someone started throwing eggs instead of balloons. When the eggs hit a vehicle owned by one of the suspects, things turned physical. Police say the initial call they received was about a fight, but while en route, the scuffle turned into a gunfight.

The owner of the vehicle hit with the egg opened fire, then someone else in the park returned fire. Two girls were caught in the crossfire, but neither injury was considered life-threatening. A third person was also injured by broken glass.

On the scene, officers gathered 15 spent shell casings and at least two vehicles were hit by bullets.

Chanda Temple, spokeswoman for the Birmingham City Schools, confirmed in a statement that the school district does not recognize “Senior Skip Day,” does not condone skipping school, and was in no way connected to the events that unfolded at the park.