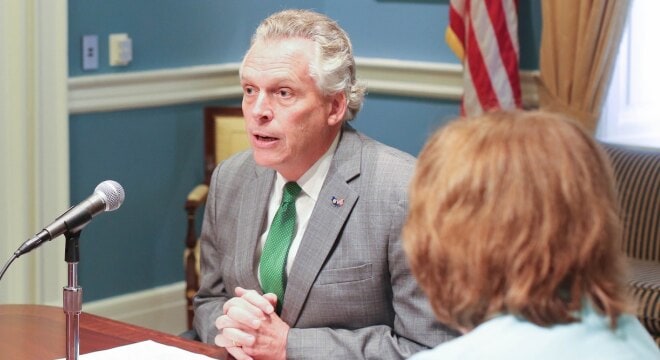 “Virginia Gov. Terry McAuliffe, seen here in a conference on March 27, wants to limit handgun sales in the state to one in each 30-day period. (Photo: Michaele White/Governor’s office)

After rejecting a sheaf of legislation expanding gun rights, McAuliffe sent a proposed amendment to lawmakers to restore the state’s one-handgun-a-month law.

The move this week followed in the wake of the Democrat’s veto of five bills he argued would weaken the Commonwealth’s gun safety laws on Friday. The measure proposed by McAuliffe is meant to address the claim by his administration that Virginia was fast becoming an outlet for easy gun sales at the risk of public safety.

“One-Handgun-a-Month was enacted almost a quarter century ago to counter Virginia’s shameful reputation as the gun-running capital of the East Coast,” said McAuliffe in a statement. “Five years ago, the General Assembly took the ill-advised step of repealing this common-sense limitation. As a result, Virginia is once again becoming the go-to state for criminals to purchase weapons in bulk.”

The Commonwealth’s gun laws became a talking point earlier this month when New York police and the Brooklyn District Attorney’s office announced 22 Virginia residents had been arrested as part of a gun trafficking ring moving guns to the city. In all, undercover officers bought 217 firearms transported from the Richmond, Hampton and Newport News areas to New York City in a complicated scheme.

McAuliffe’s proposal to the legislature would make it a Class 1 misdemeanor for anyone other than a licensed firearms dealer to purchase more than one handgun within a 30-day period. Those found guilty could face as much as a year in prison and a fine of not more than $2,500.

On March 24 McAuliffe scuttled several measures that involved guns including a number that would arm those at risk in a domestic violence situation.

Senate Bill 1299/HB 1852 would allow someone protected by a restraining order to carry a concealed handgun without a permit for 45 days after the order was issued. McAuliffe vetoed the proposal and argued, “The bill perpetuates the dangerous fiction that the victims of domestic violence will be safer by arming themselves. It would inject firearms into a volatile domestic violence situation, making that situation less safe, not more.”

Two other bills aimed at domestic violence by requiring courts to give those seeking protective orders lists of state-approve firearms classes were zapped by McAuliffe for much the same reason.

Finally, Senate Bill 1362 would have allowed those on military duty in the state either in federal service or in the Virginia National Guard to carry a concealed handgun without a permit. The Governor argued that military service, “does not automatically qualify them for the responsibilities involved in carrying a concealed handgun, any more than it automatically qualifies them for a driver’s license.”

Republican legislative leaders called McAuliffe’s office, which has seen more vetoed bills than any previous Virginia governor, “the most disengaged administration we have ever worked with.”