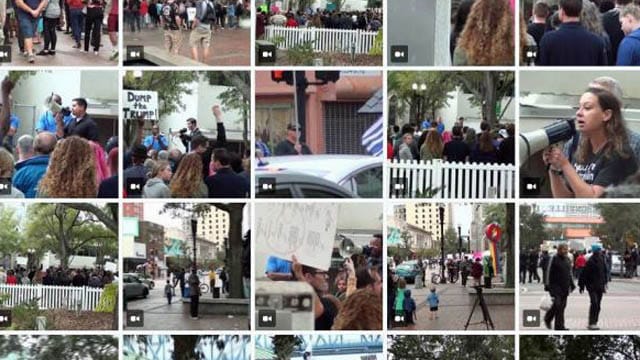 Stills from videos shot by the Jacksonville Sheriff’s Office at a rally against President Donald Trump in November. (Photo: Florida Times-Union)

The Jacksonville Sheriff’s Office used software to monitor social media activity of people at a number of protests in the last several years.

A spokesperson for the agency told the Florida Times-Union they’ve stopped using Geofeedia, a subscription service that scans Facebook, Twitter and other social sites based on keywords, but wouldn’t say whether they’ve stopped social media surveillance altogether.

The use of Geofeedia “was discontinued by this agency when it was determined that the cost/benefit was not satisfactory,” said Lauri-Ellen Smith, a spokeswoman for the Sheriff’s Office.

In October, the agency said a yearly subscription to Geofeedia was $35,000. Cost aside, the efforts have some people questioning whether such surveillance violates the constitutional rights of residents.

“You couldn’t have designed a better case study on how social media surveillance seems to sweep up protected activity on the one hand and perhaps be a significant waste of time on the other,” said Rachel Levinson-Waldman, senior counsel at the Brennan Center’s Liberty and National Security program.

“It’s like they designed their alerts to give civil libertarians a heart attack,” she said.

Search terms such as “police,” “rally,” “Black Lives Matter,” and other keywords were used to flag posts, according to Jacksonville Sheriff’s Office emails obtained by the Times-Union. Many search terms flagged posts unrelated to the agency’s search. For instance, one alert which sought to monitor a militia group called the Patriot Army yielded a social media post about a Jeep auction. And while the emails shine a light on the general strategy of such surveillance, it’s not clear what exactly the agency was doing with the data it collected.

“We will not discuss what we do, tactically, in the arena of social media monitoring,” said Smith.

The agency stopped using Geofeedia when platforms like Facebook and Instagram stopped giving the company access to their data. But experts say there are other pieces of software that can do the same thing.

And the surveillance doesn’t stop there. In November, someone from the agency recorded video of a rally against President Donald Trump. The person manning the camera repeatedly zoomed in on faces of speakers at events.

Authorities in Baltimore have used facial recognition software in conjunction with similar surveillance methods to try to identify people with outstanding warrants who were at protests, according to Clare Garvie, an associate at Georgetown Law’s Center on Privacy and Technology. The Jacksonville Sheriff’s Office has similar facial recognition technology, but said it doesn’t use it to try to identify people at protests in real time, like in Baltimore, where identities were fed back to officers on the ground.

“If the protesters are engaging in lawful, peaceful activity and assembly, there is frankly no reason for the government to be in a position to go back and identify who those folks are,” said Levinson-Waldman.