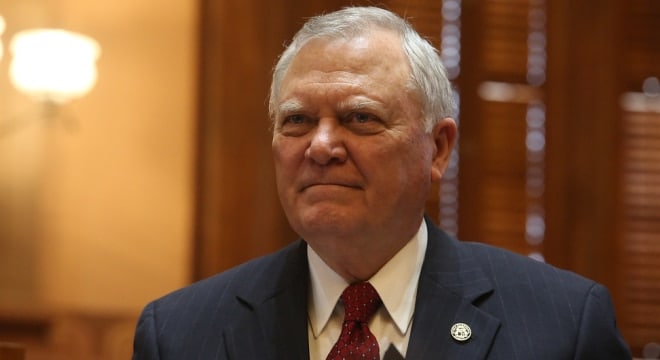 Provided lawmakers in the Georgia House act quickly, Gov. Nathan Deal could have a decision to make on signing or vetoing campus carry legislation for the second time in two years. (Photo: Georgia Governor’s Office)

In a Republican-heavy vote, Senate lawmakers on Tuesday returned a bill allowing concealed carry on public colleges and universities to the House for action against a ticking legislative clock.

The measure, HB 280, would amend Georgia law to drop some gun free zones on postsecondary campuses. Originating in the House, it was approved by that body 108-63 earlier this month, but as the Senate made changes to the language of the bill before passing it 32-22 this week it heads back for concurrence. However, as the Georgia General Assembly is set to end its current session on March 30, legislators must act fast to get it to Gov. Nathan Deal — where it could face another battle.

While the Assembly has explored campus carry legislation for the past four sessions, a successful measure, HB 859, landed on Deal’s desk in 2016 only to see the Republican scuttle the proposal though he made comments supporting it during the legislative process.

The language of the current bill is slightly watered down when compared to last year’s effort, which reportedly could see more favorable action from Deal this year. The current measure would prohibit people from carrying guns into campus housing including fraternity and sorority houses, athletic events, and campus pre-schools.

Nonetheless, gun control advocates were howling Tuesday on the action at the Capitol in Atlanta.

“Today our elected officials in the Senate ignored the will of their constituents and passed a bill that would make our campus communities less safe,” said Lindsey Donovan with the Georgia chapter of Moms Demand Action. “Just like past attempts to force guns onto Georgia campuses, House Bill 280 would pose a direct threat to students, faculty and campus law enforcement by allowing people – some as young as 18 – to carry guns on campus everywhere from classrooms to football tailgates.”

According to the National Conference of State Legislatures, at least nine states allow some sort of lawful concealed carry on public campuses with Arkansas joining that list this month following Gov. Asa Hutchinson’s signature on an omnibus bill that included the provision.