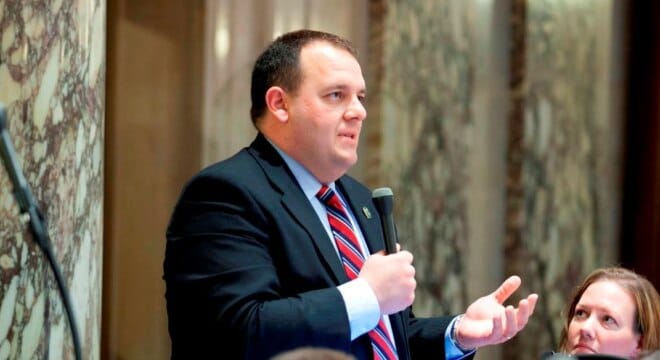 Wisconsin state Sen. David Craig is backing a measure that would change several the state’s gun laws– including making it optional to get a concealed carry permit before carrying. (Photo: Sen. Craig)

A group of about 40 Republicans on Tuesday unveiled a proposal that would let the Constitution be the only license needed to carry a concealed weapon in Wisconsin.

The measure — introduced by Sen. David Craig, R-Town of Vernon, Rep. Mary Felzkowski, R-Irma, and 39 co-sponsors — aims to keep in place the state’s concealed carry permitting system for those who want it while making it optional for those who want to carry without a license.

“At its essence, this bill does two things: removes barriers to the exercise of a constitutional right and simplifies the law,” said Craig in a statement. “If you decide to carry a weapon to protect yourself or your family, you should be able to do so easily – without bureaucratic hurdles and without cost.”

The legislation repeals and amends a number of Wisconsin’s firearms laws. Besides allowing concealed carry without a license — unlicensed open carry is already legal — the measure adds provisions for electronic weapons to the books, trims allowable gun free zones and streamlines the current language on guns in vehicles. It also updates Wisconsin’s definition of “antique firearms” and modifies statutes on carrying firearms while “shining” or spotlighting animals.

Craig launched an online petition to garner support for the sweeping proposal and both local gun rights groups such as Wisconsin Carry and national organizations are applauding the effort.

“This important piece of legislation means law-abiding gun owners will no longer have to jump through government hoops and pay fees to exercise a basic constitutional right in the way that works best for them,” said Scott Rausch, the National Rifle Association’s state liaison.

“Gun violence in Wisconsin is a public health crisis,” said Shilling in a statement. “I don’t hear anyone clamoring to put more painkillers on the street to combat opioid abuse, so why do Republicans think more guns in the hands of dangerous criminals will make our communities safer? Allowing anyone to carry a loaded, concealed firearm in public without any safety training or a simple background check is completely irresponsible.”

So far this year both North Dakota and New Hampshire have approved constitutional carry, bringing the number of states that have adopted the practice to at least 12. Lawmakers in two other states, South Dakota and Montana, approved similar proposals only to see them vetoed by their respective governors.