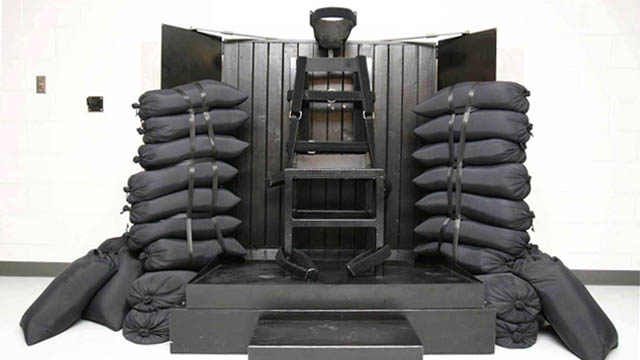 The execution chamber in Utah where 49-year-old Ronnie Lee Gardner was put to death by firing squad in 2010. (Photo: Trent Nelson/Association Press)

Lawmakers in Mississippi sent Gov. Phil Bryant a bill Tuesday that would enact death by firing squad as a means of capital punishment.

House Bill 638 is meant to give the state options for the death penalty, in the event lethal injection and other means of execution are ruled unconstitutional. Bryant has said he would support a measure that includes the firing squad option.

Fusillading would be the final option for the state under the measure, which would only allow the method if lethal injection, nitrogen gas, and electrocution are ruled unconstitutional, in that order. Attorney General Jim Hood asked lawmakers to pass such a measure last year. A similar bill circulated through the Mississippi legislature in 2016, but the firing squad language was removed before the bill passed.

“It’s been one of the more common practices through history,” said bill sponsor Robert Foster, talking about firing squads last year. “It’s very instant and about as humane as you can get while performing an execution in my personal opinion.”

Last month, the Mississippi House passed a new version of the bill, but a Senate committee amended it, removing the firing squad portion. The House wouldn’t concur on the Senate’s version, so a conference committee hammered out details, put the firing squad option back in, and both chambers passed the measure this week.

The ACLU of Mississippi is against the bill. “Reinstating barbaric methods like firing squads, hangings, and electrocution anchors Mississippi to the worst part of our history,” the group said in a statement last month.

Hanging was the preferred method of execution for the state until 1940, according to the Mississippi Department of Corrections. From then until 1952, the electric chair was moved from county to county, and was used to carry out 75 executions. In 1954, a gas chamber was installed at Parchman Farm, the state’s only maximum security prison for men. The chamber was used from 1955 until 1989. From 2002 to 2012, 17 men, all of them murderers, were executed by lethal injection.

The last time Mississippi executed an inmate was on June 20, 2012, when Gary Carl Simmons was put to death by lethal injection. Legal battles over the way that method is administered are ongoing, calling into question how future executions will be carried out.

There are currently 47 people on death row in the Magnolia State.

If Bryant signs the bill, Mississippi would become the third state to allow execution by firing squad. Oklahoma and Utah allow such executions as an alternative measure. Inmates sentenced to death in Utah prior to 2004 can choose the firing squad. Convicted murderer Ronnie Lee Gardner did just that. In 2010, a five man firing squad used .30 caliber Winchester rifles to execute Gardner. So that none of the executioners would know for certain whether they fired the lethal round, one of the rifles was loaded with a blank.

Last month, a bill was introduced in Alabama that would allow death row inmates to choose the firing squad, but it hasn’t passed out of the Senate Judiciary Committee.