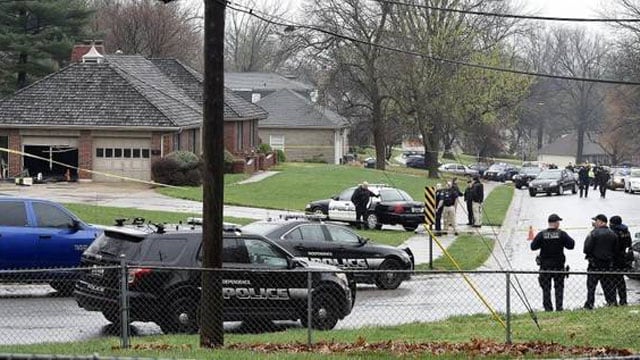 Police say the home was left with extensive damage from the burglary and subsequent shooting. (Photo: The Kansas City Star)

An police officer in Independence, Missouri, is fighting for his life after he was shot in the head Wednesday morning while responding to a call about a burglary.

The Independence Police Department identified the injured officer as Thomas Wagstaff, a 15-year veteran. He underwent emergency surgery and, as of late Wednesday night, remains in critical condition.

According to a news release, officers responded to the burglary-in-progress call at 9:43 a.m. and upon arrival, were fired upon by the suspects who were attempting to flee from the scene. Officers returned fire, but there were no reports of the suspects suffering injuries.

Following the exchange of gunfire, Wagstaff was rushed to a local hospital, while the suspects led officers on a pursuit in a vehicle that was stolen from the house where the burglary occurred. The Kansas City Star reported that during the pursuit one of the suspects bailed from the vehicle and attempted to flee on foot. A short time later police apprehended both suspects.

At the request of the Independence Police Department, the investigation is being led by the Kansas City Police Department. The identities of the suspects and other information will not be released until formal charges are filed, which could happen as soon as Thursday, according to a statement from Jackson County Prosecutor Jean Peters Baker.

Independence Police Chief Brad Halsey was reportedly out of town when the shooting occurred but after learning of the incident was working to get a flight back to the city.

The police department thanked the community for the outpouring of support they have shown and asked that Wagstaff, who has a wife and two teen sons, remain in their thoughts and prayers.

Christina Brooks attends St. Matthew’s Episcopal Church in Raytown with the Wagstaff family and described them as a nice family. Brooks said she works at an elementary school with the officer’s wife, who is an art teacher. She said Wagstaff enjoys grilling and going to his sons’ sporting events. Wagstaff’s older boy is 16 years old and learning to drive, while the younger boy just recently turned 13.

Brooks said the church started a prayer chain and their pastor spent the entire day at the hospital with the family.