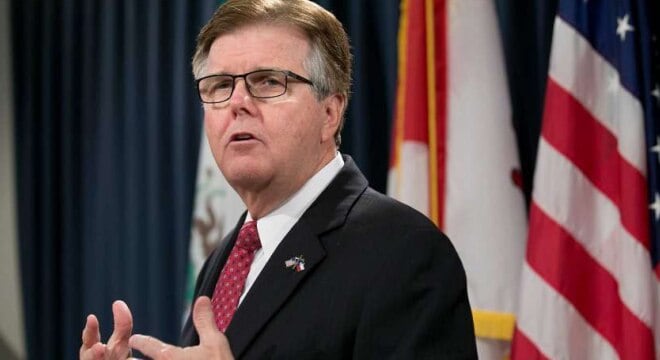 “No Texan should be deprived of their right to self-protection because of onerous licensing fees imposed by the state,” noted Lt. Gov. Dan Patrick on the passage of carry fee reform legislation in the state Senate this week. (Photo: Laura Skelding/Houston Chronicle)

The Senate this week voted in favor of reducing the handgun licensing fee in the Lone Star State while the House is looking at allowing carry without a permit altogether.

The Senate on Monday approved SB 16 which would drop permit fees from $140 to $40 on first-time applications and renewals from $70 to $40 in a 26-5 vote. A legislative priority for Lt. Gov. Dan Patrick, Texas has some of the highest handgun license costs in the country says bill author, Sen. Robert Nichols, R-Jacksonville.

“These fees impose an undue burden on people’s constitutional right to bear arms as it relates to concealed carry or license to carry,” Nichols testified in committee. “This will take Texas from having one of the highest fees in the nation to one of the lowest in the nation and still covers what I believe to be the real cost of running the program.”

With over a million residents currently licensed under a scheme signed into law by then-Gov. George W. Bush in 1995, Texas is behind only to Florida and Pennsylvania in the number of permits issued. When compared to the state’s population, there is one active permit per about 27 residents.

Meanwhile, in the House, two different bills are in motion that would bring permitless concealed carry to Texas. The proposals, HB 1911 and HB 375, were heard this week by the House Homeland Security and Public Safety Committee.

Rep. Jonathan Stickland, R-Bedford, who sponsored a similar measure in 2015 that failed to gain traction after being overshadowed by open carry and campus carry legislation, is backing HB 375.

“I don’t think the government has the right to say, ‘You have a Second Amendment right, but only if you take this class and pay this fee,’” Stickland said as reported by the Texas Tribune. “If someone can legally possess a firearm, they should be able to carry that firearm.”

This piece has been updated from the original to reflect that Texas is in third place among states in the number of active permits. The original piece omitted Pennsylvania’s figures.