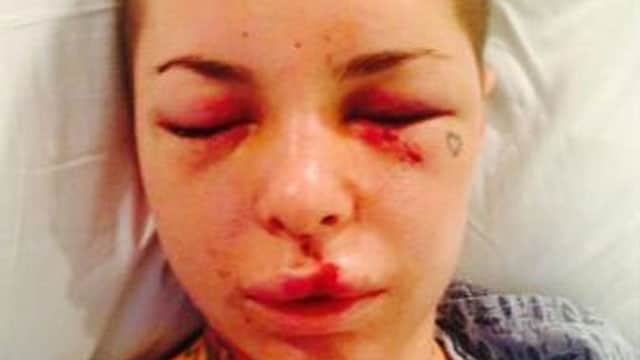 Christy Mack after the assault.

Former MMA fighter Jonathan “War Machine” Koppenhaver issued an apology via social media Monday for some of his past transgressions, including the August 2014 brutal beating of his ex-girlfriend Christine “Christy Mack” Mackinday that left her with nearly a dozen broken bones, a punctured lung, and ruptured liver.

“I am sorry for the man that I was, I am sorry for hurting you,” Koppenhaver wrote, in part. “One day, when enough time has passed, and when your wounds are fully healed, I hope that you will write to me, or, perhaps, even visit me, so that I can apologize completely, and so that I can tell you about all that I have found in regard to god. He is real and can heal and complete you deep inside, if only you knew the full extent to which he had healed me… I will never cease to pray for you.”

A jury found Koppenhaver guilty on 29 of the 34 counts for which he was charged, including attempted murder and sexual assault. He remains in the Clark County Detention Center, his sentencing set for June 5, and according to the post, Koppenhaver expects to receive a life sentence.

Nonetheless, Koppenhaver, after talking of God, said he feels nothing but joy inside.

“I am at peace,” he concluded, “I am alive and happy for the first time in my life.”