WWII anti-aircraft gun to be restored for Fort Miles Museum 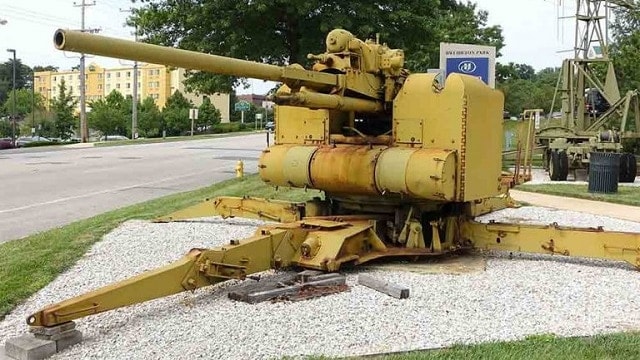 An M2 90mm anti-aircraft gun will be restored for the Fort Miles Museum in Delaware (Photo: Ammoland)

A WWII-era anti-aircraft gun arrived in Cape Henlopen State Park Thursday to be restored for the Fort Miles Museum in Delaware, according to The News Journal.

While the M2 90mm big guns were normally used to shoot down planes and destroy tanks during WWII, they were installed on the Delaware River and Bay to take out motor torpedo boats, said Gary Wray, president of the Fort Miles Historical Association.

Jim Hall, chief of cultural resources for the Division of Parks and Recreation, noted that Gen. George Patton said the guns were technological marvels second only to the atomic bomb in their importance in winning the war.

The guns weigh 32,000 lbs. and could fire two types of shells, armor piercing or high-explosive. Hall noted the power of the guns, which could hit targets up to 11 miles away and airplanes as high as 34,000 feet.

Crews would load the shells one by one, but could work at a fast pace due to the remote firing system.

“This was a model that was actually used at Fort Miles towards the end of the war,” Hall said. “We know they were being used here for top-secret research starting in early 1944 that involved the “Proximity Fuze.”

The fuze inside the artillery shells, which Hall noted was highly significant, contained within it a radio transmitter that could determine the proximity of planes and tanks and then detonate when close to its target. Fort Miles acted as the testing sight for the ground-breaking technology.

The gun set to be restored was brought to Delaware from the National Electronics Museum in Linthicum, Maryland.