Author of the infamous 'Anarchist Cookbook' dead at 66 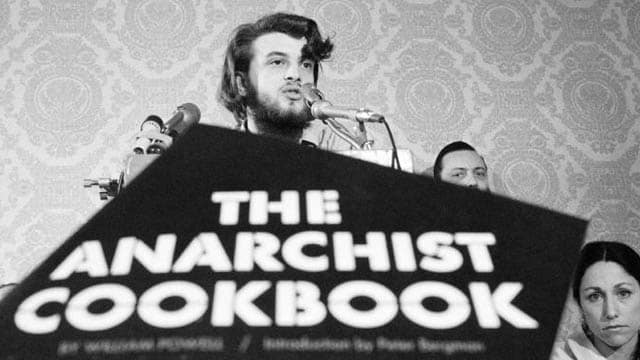 Author of the infamous Anarchist Cookbook, William Powell, died of a heart attack last July at the age of 66, but the news went largely unreported until a new documentary, American Anarchist, noted his death at the end of the film.

Powell was 19 years old when he started studying military manuals and writing his guide for revolutionary mayhem at the New York Public Library’s main branch in Manhattan in 1969. Two years later, the book was published, eventually selling more than two million copies. By 1976, Powell had converted to Christianity and began his fight to remove the Cookbook from circulation. Having never held the copyright to the work, he was unsuccessful in that decades long effort, and watched as several criminals studied the book and used the information to murder people.

“Every man in a guerrilla band should have as part of his basic equipment a handgun,” wrote Powell in chapter three of the Cookbook, where he outlined the features and pricing of several handguns and rifles. He would go on to explain how to convert a shotgun into a grenade launcher, and how to build a silencer.

“As almost everyone knows, silencers are illegal in virtually all the countries of the world, but then a true revolutionary believes that the government in power is illegal so, following that logic, I see no reason that he should feel restricted by laws made by an illegal body,” he wrote.

In a chapter on drugs, Powell explained how to get high off of banana peels. “Believe it or not, bananas do contain a small quantity of Musa Sapientum bananadine, which is a mild, short-lasting psychedelic,” wrote Powell, before outlining how to synthesize banana byproducts.

“Step 1, obtain 15 lbs. of ripe yellow bananas,” reads the Cookbook. It turns out this was a hoax published by the Berkeley Barb, an underground newspaper. Powell reprinted the instructions, allegedly believing the hoax to be true.

The Anarchist Cookbook includes four chapters: Drugs; Electronics, Sabotage and Surveillance; Natural, Nonlethal and Lethal Weapons; and Explosives and Booby Traps. Each chapter serves as a primer on those subjects, including blueprints and recipes for homemade weapons.

“My motivation at the time was simple,” wrote Powell in 2013, explaining why he set out to write the book. “I was being actively pursued by the US military, who seemed single-mindedly determined to send me to fight, and possibly die, in Vietnam.”

He wrote that his anger towards the U.S. government blinded him into believing that violence can be used to prevent violence.

“If the real people of America, the silent majority, are going to survive, they must educate themselves. That is the purpose of this book,” Powell wrote in the foreword of the Cookbook. “Almost all the recipes are dangerous,” he wrote, adding, “this book is not for children or morons.”

Several high profile mass murderers are said to have used Powell’s book to carry out their heinous acts. In 1976, Zvonko Busic, a Croatian nationalist, highjacked a TWA flight using fake bombs. He left a real bomb at Grand Central Terminal in New York, however, and a police officer was killed while trying to disarm it. Busic told investigators he found the instructions for that bomb in the Anarchist Cookbook.

Oklahoma City bomber Timothy McVeigh read the book. So did Eric Harris, the mastermind of the Columbine High School massacre in 1999. Police found the book in a safe at the family home of Jared Lee Loughner, the man who killed six people and tried to assassinate then U.S. Rep. Gabrielle Giffords in a grocery store parking lot in Tucson in January 2011.

“I do not know the influence the book may have had on the thinking of the perpetrators of these attacks, but I cannot imagine that it was positive,” Powell wrote recently. “The continued publication of the Cookbook serves no purpose other than a commercial one for the publisher. It should quickly and quietly go out of print.”

When the FBI inevitably investigated Powell, they found no evidence that he’d attempted to make any of the explosives in the Cookbook. In 1979, he moved overseas and spent nearly four decades teaching children with learning challenges in Asia and Africa. In 2013, he and his wife published Becoming an Emotionally Intelligent Teacher, one of several books the pair wrote on teaching.

“To paraphrase Aristotle: it is easy to be angry. But to be angry with the right person, at the right time and to the right degree, that is hard – that is the hallmark of a civilized person,” Powell wrote in 2013. “ I continue to work hard, in an Aristotelian sense, to be more civilized.”

Powell is survived by his wife, his sons Sean and Colin, four grandchildren, a brother, and his mother.