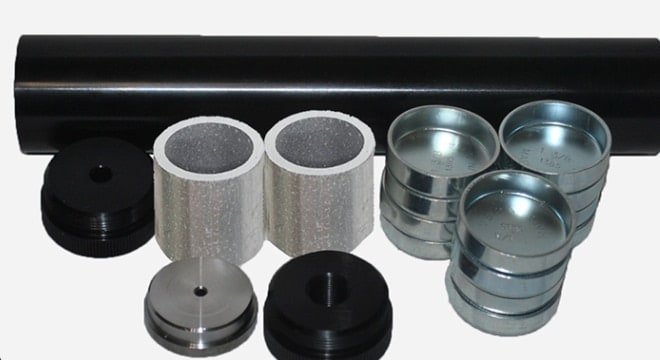 Kits offered by Solvent Trap Etc. were made from 6061-T6 Aluminum and included a tube, a number of freeze plugs, a centering tool, spacers and end caps. (Photo: solventtrap.net)

A Florida-based firearm accessory maker specializing in marketing solvent traps has pulled their website and announced on social media they have been “shut down by the ATF.”

Based out of Winter Haven, Solvent Traps Etc, who operated solventtrap.net, posted on Facebook this week that the Bureau of Alcohol, Tobacco, Firearms and Explosives has closed them down.

“They came in and seized everything while I was on a hunting trip, not just from my shop, but they even came and searched my house and took my personal computer,” noted the owner. “I am facing criminal charges even though I had a letter from the ATF stating that Solvent Traps were legal to purchase, own, sell, etc. Anyone that had placed an order with us will get a refund when I get my computer back and have access to the relevant accounts.”

Solvent traps attach to the muzzle of a firearm and are intended to be used to collect cleaning solvent and debris during bore cleaning. Typically, as long as the accessories are not designed to allow a bullet to pass through them, or muffle the sound of a muzzle report, the devices were considered legal to sell.

Cached internet archives of the company’s site show that they sold solvent trap kits for around $150 and threaded adapters and end caps for about $40. Kits were made from 6061-T6 Aluminum and included a tube, a number of freeze plugs, a centering tool, spacers and end caps.

“The BATF recognizes that a Solvent Trap can be attached to the end of the barrel, with an adapter, as a cleaning accessory and is not considered as anything other than an accessory because a projectile, or bullet, cannot pass through the tube without modification,” noted the company under a section entitled “legality.”

“This means the solvent traps can be purchased and sold without any paperwork or an NFA tax stamp. You do not need a Form 1 to purchase a Solvent Trap Kit.”

The action against the Florida company comes just weeks after SD Tactical Arms of Prescott, Arizona announced on social media they are no longer able to sell their popular line of traps– which made up their bulk of their business– as the ATF advised they could be interpreted as being unregistered suppressor parts.