DOJ announces plan to speed up deportation of undocumented criminals 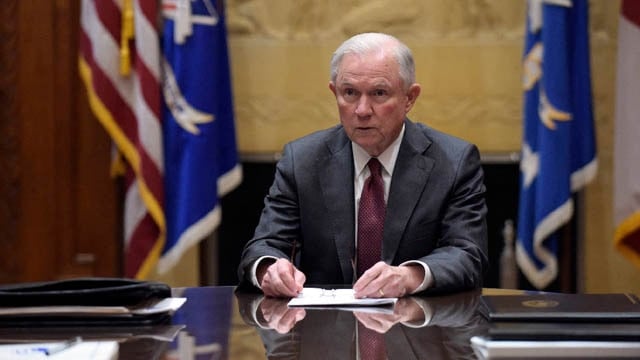 Attorney General Jeff Sessions announced a new initiative Thursday to speed up the deportation of undocumented criminals in federal prison.

Sessions said the Department of Justice will expand and modernize the Institutional Hearing Program, which identifies undocumented immigrants in the federal correctional system and facilitates removal proceedings.

“Bringing an Immigration Judge to the inmate for a determination of removability, rather than vice versa, saves time and resources and speeds hearings,” the department said in a press release announcing the effort. “These improvements will speed the process of deporting incarcerated criminal aliens and will reduce costs to taxpayers.”

As part of the effort, more Bureau of Prisons facilities will be used to facilitate in person and video teleconferencing hearings, which will speed up the removal proceedings. A new uniform and intake policy will also be established.

“We owe it to the American people to ensure that illegal aliens who have been convicted of crimes and are serving time in our federal prisons are expeditiously removed from our country as the law requires,” Sessions said.

The announcement comes as part of the Trump administration’s overall push for the deportation of violent, undocumented criminals living in America. Earlier this week, Sessions announced a crackdown on sanctuary cities, promising to withhold DOJ grants to jurisdictions who don’t comply with federal immigration efforts.