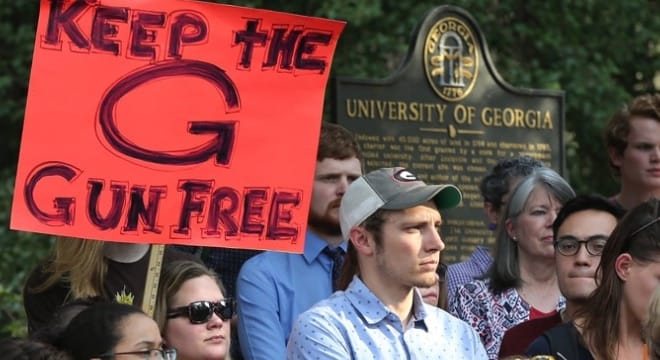 Students, faculty, and local residents protest at the University of Georgia to oppose a bill to allow the concealed carrying on campus (Photo: Curtis Compton/Atlanta Journal-Constitution)

Working past midnight on the final day of session, legislators approved a bill to bring lawful concealed carry to Georgia’s public colleges and universities.

The measure, HB 280, would amend Georgia law to drop some gun free zones on postsecondary campuses. It was approved by the House last month and sent back by the Senate this week with changes that had to be worked out Thursday in committee conference. The proposal now heads to Republican Gov. Nathan Deal who vetoed a similar bill in 2016.

Republican House Speaker David Ralston argued Thursday that, while the current bill was not as much of a reform as some would like, it still strengthens Second Amendment protections for Georgians.

“You don’t all the time score a touchdown on a play. I though we got a first down at least,” Ralston said.

The language of the current bill is watered down when compared to last year’s effort, which reportedly could see more favorable action from Deal this year.

The final measure approved in conference committee would prohibit people from carrying guns into campus housing including fraternity and sorority houses, athletic events, and campus pre-schools. It would also block off areas used during disciplinary meetings and classes where high school students are in a dual enrollment program.

Finally, the bill includes a special fine system for violations of the act, which is set at $25 with no provision for jail time.

Deal, in his final term in office, has 40 days to veto, sign or allow the measure to simply become law without his signature.