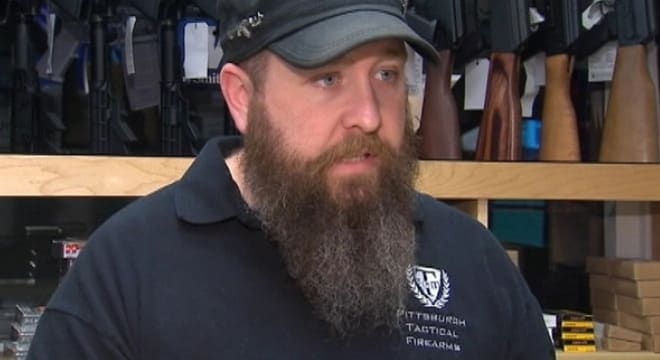 Erik Lowry and his shop, Pittsburgh Tactical Firearms, are accused of selling as many as 100 guns without the proper paperwork and illegal possession of an NFA item. (Photo: KRMG)

A western Pennsylvania gun store is in hot water after regulatory inspectors contended proper records weren’t kept on 100 transactions and its owner had an unregistered National Firearms Act item.

Erik David Lowry, owner of Pittsburgh Tactical Firearms in McKeesport, was indicted on March 21 in federal court for felony witness and evidence tampering and owning a shotgun classified under the NFA as a destructive device without supporting documentation. In a separate indictment, his shop was cited for failure by a federally licensed dealer to keep proper records.

According to court documents, from early 2014 until January 2017, the store sold and delivered over 100 firearms without completing any of the required paperwork for such sales. As for Lowry himself, he possessed for several months in 2016 a Penn Arms Striker 12-gauge destructive device that was not registered and, in order to keep the ATF from investigating the specialty weapon, asked several people at the shop to remove the gun from the safe and throw it in a dumpster.

Pittsburgh Tactical suddenly went out of business last month, posting a notice on social media, since removed, that said they were closing due to the ATF. “Without getting into detail we have had some issues with the ATF that have made it impossible for us to continue to do business. We will be shutting our doors on the 9th of February,” the store said.

The store’s once-active social media page with over 27,000 followers and website have been taken down.

Lowry and his shop were well known to the community after providing discounts in the wake of deadly shootings local and offering to give away ammo, magazines and an AR-15 to support the Second Amendment.

The two cases were merged this week and a plea hearing is set for May 30 before U.S. District Judge Arthur J. Schwab.

If convicted of all charges, Lowry faces as much as 50 years in prison.