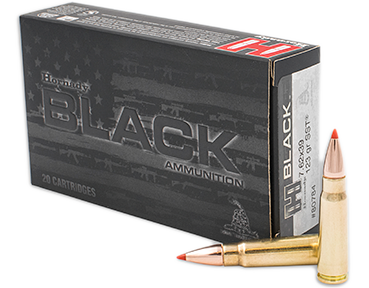 The Black line of ammunition, introduced in 2017, features a slew of calibers including the 7.62x39mm. (Photo: Hornady)

Citing improvements in the manufacturing process, the engineers at Hornady are introducing reloadable brass cases for the 7.62x39mm round in the company’s new Black ammunition line.

Loaded with Hornady bullets, the new Black series features versatile loads aimed at fitting, feeding and functioning in a bevy of platforms.

The team at Hornady showcases a long list of systems the ammo is designed to work with including modern sporting rifles, tactical bolt action long guns, suppressed firearms and carbines or pistols.

The brass casing, a favorite among reloaders, integrates Hornady’s top-notch quality into its construction allowing the company to pass that quality along to consumers without raising prices.

“Upgrading from steel cases to brass adds value to the cartridges without adding cost to the consumer,” Hornady Vice President Jason Hornady said in a recent press release.